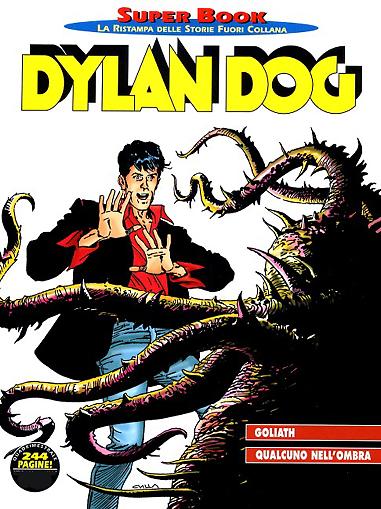 Introduction: A terrifying open-sea mystery and a nightmare awakening for Dylan Dog!

Goliath
Plot and script: Pasquale Ruju
Artwork: Nicola Mari
A giant of steel in the middle of the ocean. The Goliath oil rig gives no further sign of life, like a super-technological castle adrift in the middle of nowhere. Now it's up to Dylan Dog to deal with the mystery. Something has risen up from the bowels of the Earth to take on the body and soul of the crew. A primeval force, an animal that has survived the millennia, a subtle and deadly intelligence!

Qualcuno nell’ombra
Plot and script: Paola Barbato
Artwork: Giovanni Freghieri
A deafening sound, that he seems the only one to hear, makes Dylan faint, sending him inside an unbelievable nightmare! On awakening, Craven Road investigator finds himself hunted by police, accused of multiple murder. Unfortunately, the evidence against Dyd seem incontestable…