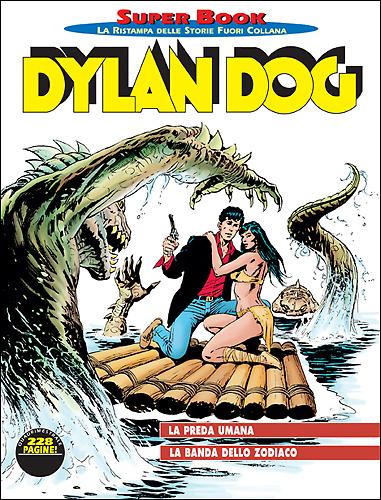 Introduction: From a land governed by magic right up to the rooftops of London, the reign of the Band of the Zodiac: fear knows no boundaries!

Cover: Claudio Villa
The human prey
Plot and script: Gianfranco Manfredi
Artwork: Giovanni Freghieri
What is mysterious Ishar running away from? Who is chasing after her? She comes from another world, maybe from another era. In an earlier time, she escaped from a brutal universe she only dimly remembers. Now she has to go back there, to revive her knowledge of herself and her own people. Dylan is summoned to be her travel mate on a journey towards peoples endowed with amazing powers, knights in armor and strange spells, in a land governed by magic…

The Band of the Zodiac
Plot and script: Gianfranco Manfredi
Artwork: Roberto Rinaldi
There’re entities creeping over London’s rooftops… beneath the darkened night-time sky a gang of crooks are going about their shadowy intents… They’re acrobats of the air and of life, ready to face extreme risk suspended only from the light of the stars, joined like blood brothers. But something has cracked in the Band of the Zodiac and its members are beginning to die…