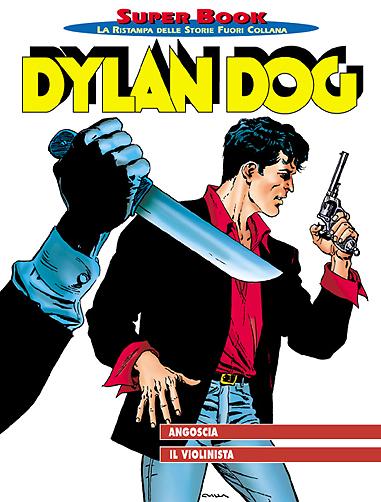 Introduction: A movie that drags you to the very brink of madness! A musician transforms his artistry with the violin into a deadly weapon!

"Angst", a great movie… It’s on tonight at the Fairy. Go and see it, but take care not to let yourselves get too involved in the plot – it might be dangerous! The story of Ollie and Ollie’s mother, their morbid homicidal relationship, could penetrate right into your bones. It could abduct you into a world of never-ending nightmares and transform your life into a crazy motion picture!

The violinist
Subject and Script: Pasquale Ruju
Artwork: Roberto Rinaldi
Music is everything for him, it flows along his fingers like a regenerating force: only from music can he draw the strength to live. He has to keep on playing, keep on weaving the pattern of his wistful nocturnal melodies, the sweet serenades he dedicates to all his victims! A new murderer is free to strike, as ungraspable and elusive as a solo by Paganini. And for Dylan there is only one clue, taut and sharp… like a violin string!