Everything you need to know about Dragonero
WHAT’S THE ORIGIN OF THE "DRAGONERO PROJECT"? HOW DID YOU COLLABORATION BEGIN?
A long, long time ago... at dinner, during one of the many editions of the Comics Festival in Lucca, we began talking about fantasy literature and found out a common ground. Both of us secretly dreamt of creating a Fantasy series for Sergio Bonelli Editore, he publisher we both worked for, though on different series. We never stopped talking about this since then, and we built our project, waiting for the right time to submit it to our publisher.

MANY YEARS WENT BY BETWEEN THE PUBLICATION OF DRAGONERO - ROMANZO A FUMETTI, AND THE BEGINNING OF THE MONTHLY SERIES. WHY?
With our 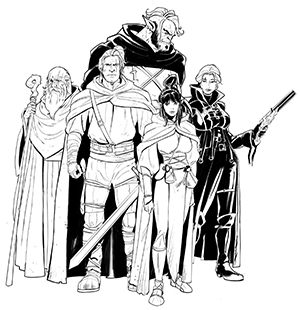 Romanzo a Fumetti we managed to get Fantasy into Sergio Bonelli Editore by the front door; a self-concluded story, in a very classic style – with a unwilling hero, a “magic” sword, a mixed company (made of warriors, wizards, elves and orcs) – centered around a difficult mission, crucial for the world safety. The dossier we created to allow the artist – Giuseppe Matteoni – to bring to life on paper the world we had imagined was so  substantial and complex that we felt encouraged to follow up this Dragonero tale with other stories. The preparation lasted for a very long time, and when the publisher gave us the green light for the monthly series, it took us at least three years to form the artists’ team and to write and do the art for all the albums of the first year.

WHAT’S YOUR WORK METHOD, WHILE WRITING DRAGONERO? IT IS ALWAYS A JOINT, FOUR-HANDED EFFORT?
We write together only the sagas that last for several albums, like the four-episode saga that open the series. We use this method for the story with a very strict continuity in the events concerning our heroes, and where there are pivotal changes. Clearly, we also have to agree on the details of the adventures that we write separately, to avoid contradictions. Each one of us writes the script of his own single stories, but we discuss and decide together about the scripts.

N COMPARISON WITH NATHAN NEVER, MARTIN MYSTÈRE, GEA OR LILITH, WHAT ARE THE DIFFERENCES IN THE DEVELOPMENT OF A MANY -VOICED ADVENTURE LIKE DRAGONERO?
ENOCH: For me, it was a whole new experience. I have always been the “sole” author of my books, writing script and plot and doing the art, all on my own. Here I had to write for other artists, something I already did for some graphic novels for other Publishing Houses; and I wrote for a monthly series that could go on forever, in theory, while Gea and Lilith are mini-series where the beginning and the end are already established.
VIETTI: I have a headstart on Enoch on this, I confess, because I’ve been writing scripts for monthly series since many years ago, and I’m used to work with different artists. For Dragonero, though, we head to create a whole world from scratch... this was more of a new thing for me than for Luca, because he had already done something similar for his other characters. In the end, taking each other’s advice, we found the best solution to these problems.

WHAT WAS YOUR INSPIRATION FOR THE FANTASY SETTING AND STORYTELLING OF THE SERIES?
There were many sources of inspiration, and we found we shared a lot of them. Novels like Tolkien’s classics ("The Lord of the Rings", "The Hobbit", "The Silmarillion"), the books of Robert E. Howard and Terry Brooks, and also George R.R. Martin’s modern fantasy; Peter Jackson’s rendition of the Tolkien sagas, the TV series "Game of Thrones", but also "Conan" by John Milius and Ridley Scott’s "Legend". We draw a lot of our inspiration also from the classic works of European literature: the Iliad and the Norse saga of the Edda, the Nibelung tales and novels like "Ivanohe" e "The Black Arrow". But it was as important also the world History, especially of the IX-XIV centuries.

VEN BEFORE IT CAME TO THE NEWSSTANDS, DRAGONERO HAS BEEN AT THE CENTER OF SEVERAL "EXTRA" PROJECTS. CAN YOU TELL US SOMETHING ABOUT THIS?
We began almost a year ago, making available online a Blog about our hero’s Journal: the pages retrace, with drawings and personal comments, the memories of Ian Aranill’s journeys.
Along the journal, we put some sections with images and descriptions of Dragonero’s world, from the maps to the army banners, from the legends of the past to an account of places, uses, beasts and monsters. The Blog will be regularly updated, also with a closer examination of some important aspects of the stories, while they will be published. Beside the Blog, since January we are in contact with our readers through our official Facebook page , while a group of fans created the Dragonero forum where the authors also comment and interact. Our Romanzo a Fumetti, out of print since a long time, is now available in digital format on the App Store. Also on the App Store, is now available a free App for iPad with a 3D map of Dragonero’s world and a small, first Erondàr encyclopedia, with details about characters and places, a video-presentation of the series and a small dictionary of the most used words of the ancient language we created for our narrative universe. All these features will be periodically updated. We are also working on our collaboration with Wyrd Edizioni, to create a Dragonero role-playing game, proposed in print-on-demand and digital format from the 2013 edition of Lucca Comics and Games Festival. It’s a huge work, created for the Rpgamers, of course, but also for those who’d like to have a Dragonero book full of information, exclusive covers and more than a hundred full-color illustrations. That’s all, for now, but... we have other projects in progress for next year, and one of them will be very important... but now we can’t say anything more!