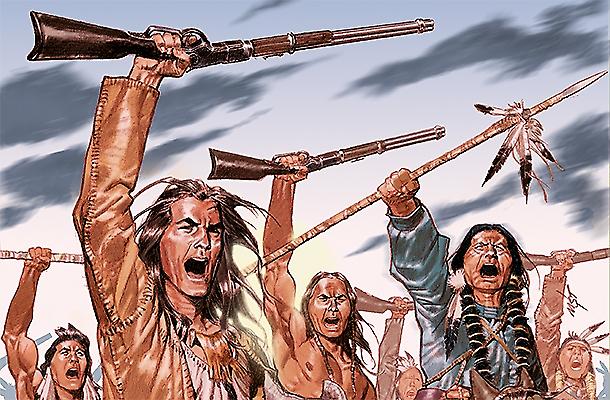 Gianfranco Manfredi replies to your questions

Everything you need to know about Magico Vento
IS THE CHARACTER

"MAGICO VENTO" INSPIRED BY THE ACTOR IN THE MOVIE "THE LAST OF THE MOHICANS", DANIEL DAY-LEWIS?
Yes. We felt that his rugged features expressed intelligence and sensitivity, embodying a figure of a hero rather different from the classical tough guy brimming with confidence. Of course, we adapted his facial features graphically, partly because it was impossible to convey through illustrations Daniel Day-Lewis's incredibly mobile expressions and his enormous range of subtle shades of emotion. Day-Lewis is an actor who can shift from one character to another and get completely under the skin of the various roles, never appearing the same twice.The allusion to "The Last of the Mohicans", together with the other very obvious allusion to the figure of Edgar Allan Poe - in the guise of our Willy Richards, called Poe, Magico Vento's inseparable companion - provide a visual clarification of the programme of the series, which was and is that of combining the narrative tradition of Frontier literature with the neo-gothic tradition of ghost stories and horror literature that characterizes American literature in the Eastern states.

WHEN ARE SPECIAL EDITIONS OF MAGICO VENTO DUE TO APPEAR?
There aren't any planned. We designed the series on the basis of a criterion of continuity, and over time this has become a more rigid requirement. It is difficult, at this stage, to create separate episodes not belonging to the normal series. Furthemore, there are problems of a practical order, above all the fact that the serial is written, with only very occasional exceptions, by a single script-writer, who is too busy to compose additional instalments. But I won't deny that I would really like to offer readers a "Magico Vento Plus", and I do have a couple of long stories set aside that would be just ideal for this purpose. At present, however, we cannot afford to take one of our illustrators away from his work on the normal series, entrusting him with a long job that would involve at least two years' work and would deprive our readers of other creations they are confidently expecting from him over the next few months. 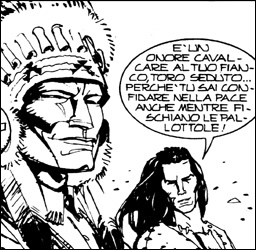 WHY NOT SET UP A MEETING BETWEEN MAGICO VENTO AND TEX OR OTHER BONELLI HEROES?
Personally, I'm against cross-overs. Each character brings their own world with them and their own way of dealing with things. If you mix worlds, you risk introducing confusion and reciprocal blurring of the figures of the protagonists. In any case, Magico Vento has already met, and will increasingly often meet, famous historical figures of the period such as Wild Bill Hickock, Calamity Jane, General Custer, Crazy Horse, Red Cloud, Sitting Bull and a whole host of minor but equally important figures, seen in their lesser known and more "obscure" aspects. If other comic book characters were included together with these figures, I fear the development of the various plots would become absolutely unmanageable.

WHERE DO YOU FIND THE DOCUMENTATION?
Other series can draw inspiration from previous cinema production, but unfortunately we can only rarely do this, because the world of Indian myths has been very little explored in cinema. Equally poorly explored, cinematically speaking, are the whole area of the Dakotas and the part of North America where our stories our set. At the beginning of the series, I made use of books on Indian myths and legends and studies on details of American history, or specialized journals, mainly available only in English. Fortunately, the enormous expansion of the Internet and the proliferation of websites has made archives, including photographic archives, far more easily available, especially the photographic archives of all the major American historical societies and centers for the preservation of what remains of the past. By consulting these sources I can obtain an infinity of non-narrative materials, i.e. pure documentation, and this means, for instance, that I can choose the locations, in other words the different environments in which to set the story, even before writing begins. This way, the environment is transformed from a mere frame into a full-scale co-protagonist, and the illustrators can focus their talent on extremely stimulating visual references.

DO YOU ACCEPT FREELANCE CONTRIBUTIONS FOR THE SCRIPTS AND/OR THE ARTWORK?
We receive a constant flow of proposals. Not so much for artwork, more often suggestions for the storyline. Sometimes extremely short subjects, at other times more developed. We would be happy to preside over the début of budding comic strip writers, but unfortunately our series is extremely difficult, first and foremost because of its period characteristics, but also because of the different narrative elements (historical, the world of fantasy and horror, adventures and even emotions) that compose the individual elements. In addition, one fundamental stumbling-block is the continuity of the series: since it is undergoing constant development, it involves transitions and shifts of which a non in-house contributor can have no prior knowledge. However, I always read the various proposals I receive very carefully, and I try to answer each letter personally, whether it comes from professionals or not; I try to explain what's right and what wrong about their proposals - in relation to the series, obviously. So, while I'm not simply trying to discourage anyone, I think people should be warned of the (objective) difficulties of becoming part of Magico Vento.

WHY DON'T YOU CREATE ENTIRELY INDIAN STORIES, AS THESE CONSTITUTE THE MOST EVIDENT AND INNOVATIVE CHARACTERISTIC OF MAGICO VENTO?
The Indian stories are particularly striking precisely because they aren't repeated too often. I'm well aware of the risk of turning the encounter with Indian myths into a sort of cliché, a sort of stock model that would eventually sweep away any sense of surprise or remarkable happenings, so that they would simply become hackneyed.
Another problem is that these stories are always rather difficult to write, because if you want the reader to understand the (broad) sense of a myth, you have to explain lots of other things as well: habits and customs, rites and traditions that are totally unfamiliar to us. But at the same time, you have to be careful not to simply reduce the story to an ethnological report at the expense of the sense of adventure. 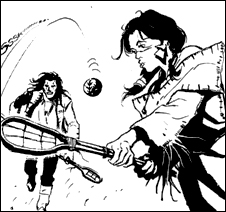 S THAT COULD GENUINELY BE DEFINED AS "HORROR" ARE INCREASINGLY RARE IN MAGICO VENTO, EVEN THOUGH THE SERIES, BY DEFINITION, IS A HORROR-WESTERN. WHY?
After years spent on tales of monstrosities and all kinds of gruesome evil, in novels and comic books, I must confess I have become somewhat tired of the genre. But it's not just a question of being tired of it, and it's certainly nothing to do with "prudery" or a prudish desire to avoid "extreme" situations. Faithful to our goal of telling about the "obscure side", we have decided to offer readers a more "psychological" version of fear, and therefore to avoid over-exploitation of gory splatter effects. The theme of monstrosities will more and more decidedly shift towards Lovecraft and his "unspeakable horrors".

SEX IS ALSO ALMOST ENTIRELY ABSENT FROM THE SERIES, AND VIOLENCE IS INCREASINGLY FILTERED, TO THE POINT THAT IN SOME EPISODES MAGICO VENTO DOESN'T KILL ANYONE AT ALL. AREN'T YOU BEING TOO MORALISTIC?
There are lots of ways in which the theme of sexuality is addressed in Magico Vento, but we have ruled out explicit sex, as is the tradition for the publisher Bonelli; furthermore it would be completely out of place in a Western series that is already full enough of oddities as compared to the classical western. As for violence, we prefer to show how it "permeates" the world - in behavior, the climate, the atmospheres, and even in the apparently civilized mechanisms of "Progress". Someone (I can't remember who) once wrote: "Any fool can grab hold of a pistol", and since Ned Ellis, alias Magico Vento, is no fool, it's appropriate that his human qualities should be highlighted too, especially given that he's a shaman. 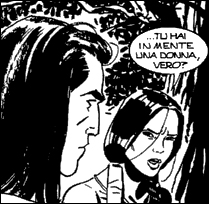 ES MAGICO VENTO RELATE TO WOMEN? SURELY HE MUST HAVE A STEADY GIRL-FRIEND, AND LOTS OF PASSING ROMANTIC ATTRACTIONS, OR DOESN'T HE?
Magico Vento is a Strange Man and the way he relates to women is part of this "strangeness" too. Ned isn't the kind of guy who's always looking for the same kind of woman - the ideal woman - in all the females he meets. Nor is he the type who judges women exclusively by their looks. Ned shies away from simplifications: a person's love life is full of nuances of emotion: why not explore them? The various women Ned meets as the story develops represent the most disparate array of types… a bit like Ulysses who meets very different kinds of women, but without an obsessive need to reel off a string of conquests. Ned tries to appreciate each one for what she is, for the mystery concealed within her. But don't expect him to find a partner in every story (after all he's a shaman, not a viveur).

WHY HAS THERE NEVER BEEN A VAMPIRE APPEARING IN ONE OF THE MAGICO VENTO STORIES?
We love vampires, but their traditions are rooted deep in the heart of Europe. Sometimes, by mixing traditions that are too remote from one another, the result may be a real mess, as happened to William Beaudine in 1966, with his movie "Billy the Kid against Dracula". In this movie, Billy Kid, who'd decided to settle down and start a family, supposedly married …..Dracula's niece, and imagining Dracula as an uncle was really way over the top! We would like to avoid that kind of risk, although we by no means rule out that at some point in the future an alluring vampire may put in an appropriate appearance in our series.

HOW COME NED ELLIS RIDES A WHITE HORSE IN SOME OF THE STORIES AND A BROWN HORSE IN OTHERS?
Ned changes horses. He doesn't have just one single horse. We wanted to avoid the "Curse of the Hero's Horse". This is an ancient curse that plagues the authors of celebrated western characters such as Pecos Bill, Lucky Luke and Tex Willer, all of whom possess duly baptized steeds. Over the years, we get an endless flow of requests from passionate readers demanding an update on the state of these equines: how they're doing, the state of their health, what they feel like, what's happened to them, whether or not they'll find the mare of their dreams, and so forth. Among the many horses he rides, our Ned definitely has a favorite that he uses for great occasions, but we will never reveal its name, so as to respect its privacy.