Giancarlo Berardi replies to your questions

Everything you need to know about Julia 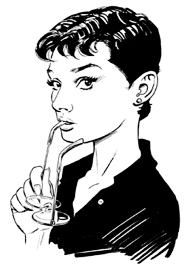 WHY A WOMAN AS THE MAIN CHARACTER OF A SERIES?
For a man, gaining insight into a woman's psychology is like untangling a fascinating terrible mystery, like entering into an alien world and learning to interpret its language. The art of story-telling is fundamentally an act of mimesis. My generation was brought up in an age of pronounced differentiation between the two sexes: males were supposed to be male both in their exterior and interior characteristics. And the same for females. A cultural model that became a pressing invitation to get rid of that percentage of the opposite sex all human beings carry within them. Over the years, I've realized this was an impoverishment. So I've started to cultivate my female part very carefully. Today I identify it with sensitivity, perception and creative imagination.

JULIA HAS A STRIKING RESEMBLANCE TO THE ACTRESS AUDREY HEPBURN. WHAT'S THE REASON FOR THIS CHOICE?
When I was about five or six, Audrey Hepburn was my first love as a movie actress. And you never forget your first love! 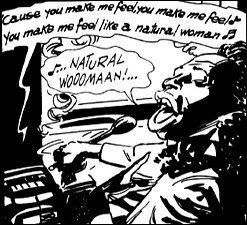 WHAT'S THE FUNCTION OF THE SECONDARY FIGURES IN THE JULIA STORIES?
In this series (but possibly in all of them), the secondary figures play a fundamental role. Since this is a realistic story, based on the objective method, the protagonist is intended to be the closest possible representation of a normal human person. I mean, she doesn't have any superpowers or mystical knowledge, she doesn't practise martial arts and she doesn't know how to use firearms. Her talents are her intelligence, her professional expertise, ability to identify herself with a situation, and her intuition. But the context is still noir, in which particularly heinous crimes are committed. Hence the need for Julia to be involved with the police (Officer Alan Webb and Sergeant "Big" Ben Irving) and to be accompanied in the story by a private investigator, a man with an athletic physique not averse to using his hands (Leo Baxter). But Emily, who is black, and the Persian cat Toni, are part of Julia's family, and Emily has the twofold role of being a home help and an affectionate "nanny".

IS IT TRUE THAT WHEN YOU WERE PREPARING THIS SERIES YOU ATTENDED A UNIVERSITY COURSE IN CRIMINOLOGY?
Yes, I took a course at the Institute of Forensic Medicine in Genoa, as an observer. It was a fantastic opportunity to acquire in-depth knowledge on this Plot and to have personal experience of the educational approach of a real criminologist. In addition, I was able to consult the vast collection of books at the Institute library, and this gave me a number of ideas on how to set up my own well-stocked bookshelf with works on psychology, sociology, psychiatry, psychoanalysis, forensic medicine, ballistics and criminology. These were later supplemented with novels, real crime reports, documentaries, movies…. a boundless repertoire that I continue to draw on with the voracity of the neophyte and the meticulous attention of the professional.

WHAT ARE THE CINEMATOGRAPHIC OR LITERARY MODELS UNDERLYING JULIA?
My cinematographic and literary memories go back quite a way in time: for instance "M" by Fritz Lang, "Psycho" by Robert Bloch-Alfred Hitchcock, the "Boston Strangler" by Richard Fleischer. I've always been a keen reader of detective stories and thrillers, in the various manifestations of this genre - including the crime story - so much so that when I was a student I wrote my undergraduate degree thesis on the "Sociology of the thriller". I owe an enormous debt to thousands of books and movies, too many to be able to cite them all. 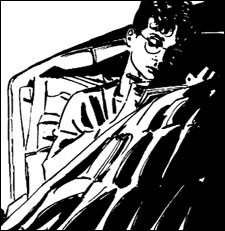 JULIA JOTS DOWN HER IMPRESSIONS IN A DIARY. IS THIS GOING TO BE A CONSTANT FEATURE IN THE JULIA STORIES?
I guess you could go as far as to call it a genuine leitmotiv. Julia's jottings in her diary allow me to get inside her thoughts and emotions, overcoming the rigid limitations of objective narration. But it's also a tribute to the California school of thriller-writing - whose supreme exponents are Hammett and Chandler - which places emphasis on a first-person narrator.

WHY 126 PAGES AS COMPARED TO THE USUAL «BONELLIAN» 94?
The greater number of pages is a necessity linked to the type of stories and the peculiar features of my way of story-writing. It's very difficult to develop a plot with suspense in 94 pages. There just isn't enough space to introduce all the various characters, set their various actions in motion and carry out an in-depth study of their psychology. By having an extra 32 pages, I can also work on the rhythm, which is of prime importance. In music, the accents, pauses, accelerations and slow-downs are part and parcel of what makes a piece fascinating. The same is true for every type of story. The reader's breathing rate should speed up or slow down in tune with the story.

WHAT DISTINGUISHES JULIA FROM OTHER «THRILLER» COMICS?
In Julia there is greater attention to the methodology and technology of modern investigative agencies, as well as detailed analysis of criminal psychopathology. And then of course there's Julia herself, the protagonist, with that blend of fragility and resoluteness, with her great big almond-shaped eyes and the way she looks, so sexy…