Everything you need to know about Dylan Dog

WHAT WAS THE REASON FOR CHOOSING THE NAME DYLAN DOG? 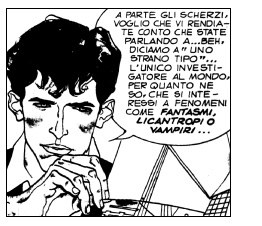 Dylan comes from Dylan Thomas. Dog, on the other hand, comes from the title of a book by Micky Spillane that I've never read, I've only ever seen in the window of a bookstore: it was entitled "Dog son of". For a long time, Dylan Dog was my XY, in other words the provisional name. I used to give my characters (and I have evidence to prove this, because there's a short story written by me, with artwork by Lorenzo Mattotti, which is actually called Dylan Dog and dates back to the 1970s. Dylan Dog was the classic name that seems to suggest "well, for the moment let's go for that name, and then we'll change it later". So you see, the difference between Dylan and all my previous characters is that in this case we never changed the name. 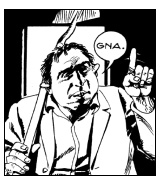 WHO IS DYLAN DOG FOR YOU?
One I'm envious of. He travels through nightmares and then rids himself of them, he fights against fear and overcomes it. Sometimes, I'd like to be him… I'd also like to be Woody Allen partly because he's a very witty melancholic, or David Copperfield, who manages to make things disappear and to disappear. However, of all the characters I've created, I think I could really only be the incarnation of Gnaghi, a degraded version of Fedor Dostoevskij's "Idiot". I drew my inspiration for the character of Gnaghi from a disabled person I used to know when I was a child. He used to wander around wearing glasses with holes in them, to see - this is what he claimed - better..

TO WHAT EXTENT HAVE YOU INFUSED AUTOBIOGRAPHICAL ELEMENTS INTO YOUR CHARACTER?
Overall, Dylan does have a bit of me, but without too much exaggeration. The differences are well known and evident. he lives in London, at number 7 Craven Road to be precise, whereas I have never been to England. Also, he is almost a seductive Romeo, he's had loads of women, he falls in love at the slightest provocation, something which certainly can't be said of me. However, some of his painful experiences (the memory of alcohol, nocturnal anxiety, the laborious process of waking up) are certainly mine as well. However, I'm Groucho too, I'm the assistant butler who shoots out quips that are utterly demential, and most especially, I'm the freaks, the blameless monsters that appear in many of the stories.

WHY IS DYLAN SO FULL OF PHOBIAS?

Well, it's true that Dylan suffers from all sorts of things: he has a fear of flying, he suffers from vertigo, sometimes he's  depressed. I didn't want to make him into an all-victorious hero, a Tex- style superhero. He's one who's sometimes a loser, or alternative, if he's on the winning side, he never wins completely. Basically, he doesn't even seem to be the right type for a comic strip hero. My stories are never comforting because the horror never finishes. It always starts all over again.

HOW DO THE DYLAN DOG STORIES ARISE? 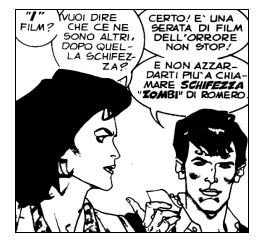 This is one of the hackneyed questions, together with "Where do the ideas in your stories come from?", which are an absolute nightmare for all those practicing the same profession as me. The fact is they presuppose the following sequence of ideas: "I want to be a writer, so now I'm going to look for some ideas". Instead, the whole thing should be turned on its head. Ever since I was a child, ideas have always started humming around in my brain, and that's why I became a writer and a creator of comic strips.In other words, it's precisely because come crowding into his mind that a kid starts writing (or painting or composing music) instead of going out to play. Much later, the development of the actual art takes shape, i.e. the ability to write even if ideas seem to stall, and also the ability to go and seek out ideas. For instance, by watching a movie or reading papers and books. I have never rushed to my computer, but I have always taken notes of witticisms or ideas to copy (so, what's wrong  with copying? - in ancient times it was common practice). And anyway, the great Totò memorably commented that "Everyone's capable of doing things, it's copying that's difficult!")… My stories try to display the light touch of an Ernst Lubitsch film the brilliant dialogue of a Neil Simon comedy and the visionary hallucinatory force of films by George Romero.

ARE YOUR DESCRIPTIONS OF THE CHARACTERS AND THE ENVIRONMENTS IN WHICH THEY OPERATE VERY DETAILED DURING STAGE WHEN YOU'RE PREPARING AND WRITING THE SCRIPT?
I'm one of the world's fussiest people, I must admit, when I'm preparing a script page. Sometimes, it takes me an entire page to describe a panel. Without in any way deflecting merit from the illustrators - who are all absolutely marvelous - I am the one who decides on the various plans, the backgrounds, right up to the minutest detail. What I want is that those who do the artwork should have exactly the same feelings as I experience when I'm writing. Sometimes, I even cry… I remember that once, as I was writing the last pages of "Johnny Freak", one of the stories most loved by the readers, I was actually weeping, I had tears falling on the computer and I kept saying to myself: ""No, don't die, don't die"", even though I was obviously the one who was going to make him die.

DO YOU FEEL YOU ARE A PRISONER OF THIS CHARACTER?
No, absolutely not, although I think he did to some extent interfere with my career as a novelist. But I don't hate my character like Conan Doyle hated his Sherlock Holmes.

HOW WOULD YOU DEFINE DYLAN DOG'S RELATIONSHIPS WITH HIS WOMEN?
Dylan Dog's inclination towards the fair sex is not something that provokes bad vibes. He's never been a playboy. When he falls in love, he takes it very seriously. He's not a mere flitting butterfly. His relationships are always something really important for him. Once, he even got married to an IRA terrorist, who later died in prison. Dylan Dog is a sentimental soul. But his romanticism is something that is full of problematic aspects, it's always doubt-ridden, and it's never schmaltzy and sloppy.

WHY DOES DEATH OFTEN TAKE ON THE CLASSICAL FEATURES OF MEDIEVAL ICONOGRAPHY IN YOUR STORIES? 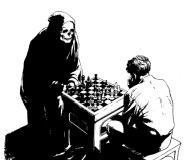 Well, this is an image that arose in my mind the first time I saw "The Seventh Seal". The image Bergman evoked was extremely powerful, by virtue of that android face which personified death.

IN THE DYLAN DOG ADVENTURES THE SENSE OF EVERYDAY HORROR IS INTENSE. WHY?
I have nothing erudite to say about horror, and I myself have no horror deep within me. The only thing is, the relation I have with my monsters is like that between Tod Browning and his freaks: in fact, I actually am the Monsters. And in real life as well, without wishing to appear morbid, I have enormous affection for the disabled and those who are different from the mainstream. Because I'm different too.