The Men in Black and Orloff

An obscurantist sect that has rewritten history. And a great one-time buddy who's turned into his Nemesis. 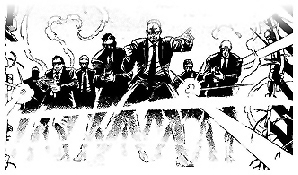 The Men in Black are a sect which, ever since the dawn of civilization, has been determined to destroy everything that is "different" or which could overturn the established way of thinking: proof of  the existence of UFOs, proof of the existence of an advanced civilization prior to ours, historical and scientific findings that don't accord with commonly held and generally accepted assumptions proclaimed by the "Establishment". The Men in Black are infiltrated at top levels in political, industrial, cultural and religious organizations and they secretly mold the development of history. They owe their name to the fact that during their missions they wear black suits, ties and glasses. For a certain period, Martin Mystère's father belonged to the Men in Black, believing that their aims were positive; but then, when he discovered the real nature of this sect, he rebelled and quit the sect. The next day he was killed together with his wife in a mysterious plane crash.

Sergej Orloff is considered by everyone to be a Maecenas - a patron of the arts - and a benefactor; only Martin Mystère knows that behind his respectable façade there hides an unscrupulous assassin. Martin and Sergej were friends for many years, and together they were disciples of Kut Humi, who supplied each of them with a weapon equipped with a special ray. They share the same interests and they have the same kind of knowledge, but at a certain point Orloff directed his knowledge towards evil ends. His face was badly disfigured in a fire, so he now hides his face behind a mask, and he also has an artificial arm, where he keeps his weapon. He's a character full of contradictions, very complex and always "in progress".

Mr. Jinx is a sort of "technological Devil" who uses modern computer science to dabble in the most secret and forbidden aspirations of mankind. As in traditional "pacts with the devil", his inventions inevitably end up wreaking their effects on the reckless people who dare to try them out.