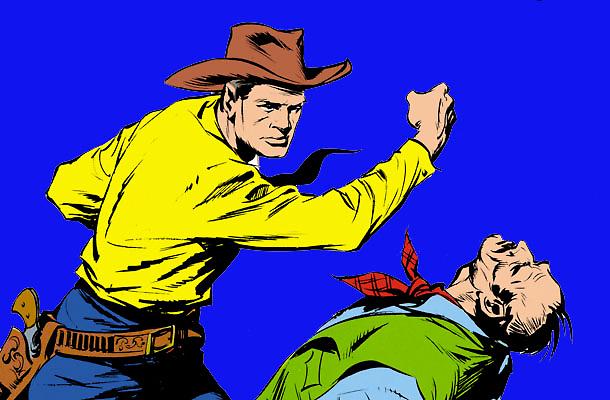 The answers are taken from an interview conducted by Decio Canzio and published in the book "Il mio nome e' Tex".
TEX HAS BEEN AN ENORMOUS POPULAR SUCCESS FOR OVER THIRTY YEARS: THIS CHARACTER, HIS TYPICAL PHRASES, HIS WORLD HAVE ALMOST BECOME PART OF THE ITALIAN WAY OF LIFE. NEVERTHELESS, IT'S ONLY IN THE LAST FEW YEARS THAT THIS POPULAR TRIUMPH HAS BEEN MATCHED BY APPRAISAL IN THE MEDIA, WHICH PREVIOUSLY SEEMED TO LOOK RATHER SCORNFULLY DOWN THEIR NOSES AT TEX (AND AT COMIC STRIPS IN GENERAL). COULD YOU COMMENT ON THIS? 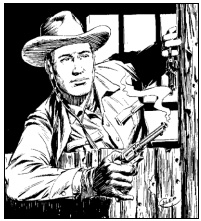 I must admit that I was - and still am - completely indifferent to these attitudes. When I was writing Tex, I used to think of my readers, common people, friends I met in the streets. They're the same people who go to the newsstand to buy the comics issues. Are there so many people who still read Tex today? Well, that means my work's served some useful purpose. Anyway, let me say I'm proud that Tex has helped to change the negative attitude towards comic strips, an attitude that was heavily penalizing until not so long ago.
TEX'S ENORMOUS SUCCESS AS A PUBLISHING PRODUCT HAS RESULTED IN A PROLIFERATION OF SHOW-CASE REVIEWS, ROUND TABLES, DEBATES, ALL DEVOTED TO THIS CHARACTER. ONE NEED ONLY MENTION "LA BALLATA DI TEX", THE VERY FINE TRAVELING EXHIBITION CREATED BY BERTIERI AND POLIDORI. HOWEVER, YOU HAVE HARDLY EVER - IF AT ALL - BEEN PRESENT AT ANY OF THESE EVENTS. WHY?
I am not one to appreciate being hosannaed by the crowds. And I shrink from everything that has the hallmark of "officialness". I vastly prefer to chat with Tex readers I may happen to meet at the coffee-bar and listen to their criticisms and suggestions. This being said, however, of course I am favorably impressed by all the events devoted to Tex. Such phenomena are truly a feast of friends: I can't possibly not feel pleased. 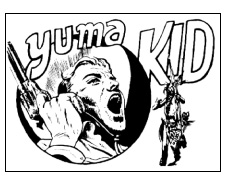 EATED IN 1948, AFTER YOU'D ALREADY INVENTED SO MANY OTHER CHARACTERS. WHY DID TEX WILLER ACHIEVE SUCH AMAZING SUCCESS WHILE "YORGA",  "YUMA KID", I TRE BILL AND OTHER CREATURES OF YOURS HAVE ALL BUT DISAPPEARED, LEAVING A MUCH FAINTER TRACE IN THE HISTORY OF ITALIAN COMIC STRIPS? DID YOU PUT SPECIAL EFFORT AND COMMITMENT INTO WRITING TEX?
No, not at all. And I must confess that even now, I don't really know why Tex worked well, while Yuma Kid, for instance, faded away. I can assure you, I put exactly the same effort and commitment into writing that character. But often I catch myself thinking that comic strips characters' lives are just real human beings' lives. Some of them are born under a lucky star while others will have a troubled life. And those of us who are in our line of work have to reckon with the chance of mysterious, unforeseeable "astral conjunctions". In other words, a comic strips writer who may actually have invented lots of characters that had no luck at all can suddenly come into the miraculous condition of having given birth to the right character (the right publishing product) at the right moment. Nevertheless, I want to point out that, at the beginning, Tex didn't actually get off to such a fabulous start. The strip started fairly modestly and then it settled down in the intermediate segments of the market at that time, trailing a long way behind the circulation of Grande Blek, Capitan Miki and Piccolo Sceriffo, just to give you an idea. Afterwards, in the fifties, this character "grew under my hands", I felt he increasingly belonged to me and I gradually identified myself more and more with him. And sales slowly began to increase, too. But anyway, by that point I was no longer bothered about the question of success as a publishing venture. I'll say it again: I was too "involved" in the character to think about anything else. 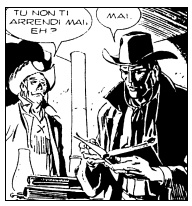 AMONG THE OTHER ITALIAN COMIC STRIP CREATORS, WHO WERE YOUR RIVALS? I MEAN, THE COLLEAGUES YOU HELD (AND STILL HOLD) IN ESTEEM?
This is a difficult question. After I set aside my role as a publisher in order to devote myself to writing comic strips, I never really looked around much to see who else was out there. Nevertheless, my somewhat unconcerned attitude didn't prevent me from reading and admiring some of the stories written by an old friend of mine Federico Pedrocchi, when they came out, or from appreciating the narrative talent of Andrea Lavezzolo, above all in those long comic strip series which, more or less explicitly, harked back to the glorious feuilleton. Or from following the famous characters of EsseGesse, which achieved outstanding publishing success.

NOW, WE'RE GOING TO HAVE A BIT OF FUN WITH THE NEXT THREE QUESTIONS, ALTHOUGH WHAT WE WANT TO ASK YOU IS IMPORTANT, BECAUSE IT WILL GIVE US SOME IDEA ABOUT THE CULTURAL BACKGROUND OF A GREAT POPULAR WRITER. NOW, IF YOU WERE TO BE SHIPWRECKED ON A DESERT
ISLAND AND YOU COULD TAKE TEN BOOKS ALONG WITH YOU, WHICH ONES WOULD YOU CHOOSE?
I'll play the game! Take your pen and write: " Heart of Darkness" by Joseph Conrad, "Burning Daylight" by Jack London, "The Three Musketeers" by Alexandre Dumas, "The Scarlet Pimpernel" by Baroness Orczy, "She" by Rider Haggard, "King Solomon's Mines" by Rider Haggard, " Texas Ranger" by Zane Grey, "Bosambo of the River" by Edgar Wallace, "Capitan Blood" by Rafael Sabatini, "I misteri della Giungla Nera" by Emilio Salgari.

YOU CAN ALSO HAVE TEN VIDEOS ON YOUR DESERT ISLAND. SO CHOOSE WHICH MOVIES YOU'LL SAVE.
I'll tell you those titles immediately: "Fort Apache" by John Ford, "Johnny Guitar" by Nicholas Ray, "Stagecoach" by Ford, "Gunfight At The Ok Corral" by John Sturges, "Shane" by George Stevens, "3:10 to Yuma" by Delmer Daves, "The Searchers" by Ford, "Winchester '73" by Anthony Mann, "High Noon" by Fred Zinnemann, "Vera Cruz" by Robert Aldrich.

NOW WE'D LIKE TO ASK YOU: HOW DID YOU GET THE AMAZINGLY FORWARD-LOOKING IDEA OF AN ANTIRACIST HERO, A FRIEND OF THE OPPRESSED, LEADER OF THE INDIANS AND FATHER OF A MIXED BLOOD CHILD?
I don't think words like "racism" and "antiracism" could be used for my tales. Rather, I think the question you've raised has to be considered from two angles. If we analyse this strip, in my Tex there's a strong reaction against injustice, ill-treatment, abuse of power. And when the so-called "bullies" are whites moving further and further towards the west, then you do also find a reaction against genocide and against racist intolerance. However, I have always considered the struggle against discrimination within the wider context of rebellion against any form of oppression. On the other hand if you consider the atmosphere of the period in which Tex was born, then my choice has to be seen as a reaction against the prevailing conformism of that time. But why was I that way whereas other people weren't ? Well, even at that time I used to read a lot of books about the Native Americans and I'd learned to respect those indomitable populations. 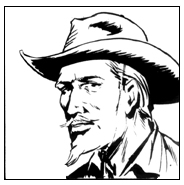 BY YOUR INTERPRETATION OF KIT CARSON. ANY COMMENTS ABOUT THAT?
My Carson has nothing to do with the historical character. Tex's pard is a cheerful companion of adventures, a meek man who becomes brusque and implacable when the circumstances call for it. The true Kit Carson, on the other hand, was an unscrupulous and cynic individual, who was even guilty of fighting against the Navajos with extremely unfair means.

AS A COMIC STRIP CREATOR YOU CAME INTO THE LIMELIGHT IN THE 1930S TOGETHER WITH THOSE AMERICAN COMIC STRIPS THAT BECAME CULT OBJECTS FOR THE PRE-WAR GENERATION, BUT ARE STILL IDOLIZED BY MANY YOUNG PEOPLE TODAY. FOR INSTANCE FLASH GORDON, PHANTOM, CINO AND FRANCO, MANDRAKE: WHAT WOULD YOU SAY WAS YOUR RELATION TO THESE CELEBRATED COMIC STRIPS?
I used to read them. I liked them. But nothing more. My way of story-telling is completely different from the American approach. The technique of those great scripts (so concise, so terse) was bound by the medium their tales were intended for: a strip of three panels in daily newspapers. Whereas I have always preferred a manner of story-telling which is suited for long episodes rich in dialogue.

YOU WERE AN AVID READER OF CRIME STORIES OF THE FLOURISHING PERIOD: VAN DINE, CHRISTIE, WALLACE; BUT IN THE TEX STORIES MYSTERY DOESN'T SEEM TO BE AN IMPORTANT INGREDIENT. WHY NOT?
I have always preferred action to plot complexity. My characters are people who move in vast wild places and so they necessarily have to be much more dynamic than, say, Hercule Poirot or Philo Vancer. However, I'd like to correct you on one point. Rather than the authors you mentioned, I actually prefer the writers of action-packed detective novels of the forties and the fifties. Two classic names: Peter Cheyney and Mickey Spillane.

THROUGHOUT ALL THESE YEARS, WHAT KIND OF RELATIONSHIP HAVE YOU HAD WITH AURELIO GALLEPPINI AND, MORE GENERALLY, WITH THOSE WHO'VE CREATED THE ARTWORK FOR TEX?
Unfortunately, the physical distance separating Milan from the Tex illustrators has made it difficult for me to establish the same close relationship I once had with illustrators such as Antonio Canale, Rino Albertarelli, Raffaele Paparella, Pier Lorenzo De Vita, Carlo and Vittorio Cossio. I used to often meet up with these friends, as we lived in the same city, and we used to talk about comic strips in a coffee bar or out on the street or at someone's home, in a light-heartedly bohemian atmosphere. However, for many years I spent my summer holidays in a mountain resort, where I used to spend the days together with Aurelio Galleppini and his family.