The graphic designer of Tex

A short biography of Aurelio Galleppini

Aurelio Galleppini, also known as Galep, the graphic designer of this character and illustrator, was born in Casal di Pari (Grosseto) on 28th August 1917, of Sardinian parents. After spending most of his youth in Sardinia, he abandoned his studies in the second year of the "Istituto industriale" in order to take up drawing and painting, which he cultivated as a self-taught art. 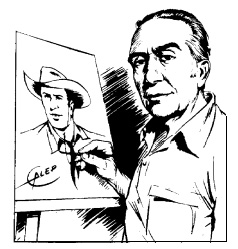 When he was 18 years old some of his drawings appeared in animated cartoons created on behalf of a German factory, which produced two-stroke projectors. Galleppini's first drawings published in a periodical date from 1936: they were illustrated fairy tales destined to "Mondo Fanciullo". From 1937 till 1939 he contributed to "Modellina" with his first illustrated tales - "In terra straniera", "La prova dei coccodrilli", "All'ombra del tricolore", "Le avventure di Pulcino" (the latter a large colour album with a comic slant). He also designed some Covers for "Il Mattino Illustrato" and contributed the artwork for "Il segreto del motore" by Andrea Lavezzolo. During the same years he provided the artwork for two long comic-strip stories published by Mondadori, with scripts by Federico Pedrocchi: "Pino il mozzo" and "Le perle del mar d'Oman". In 1940, Galleppini moved to Florence where he started working with the publishing house Nerbini. Several comic strip stories came out in "L'Avventuroso", for some of which Galleppini also composed the scripts. However, the censorship and other absurd orders issued by the regime, which made a travesty of the content and form of comic-strip stories, prompted Galleppini to temporarily cease all activity in this field. During the immediate post-war period he devoted himself to painting (with noteworthy success), designing posters and teaching the art of drawing. 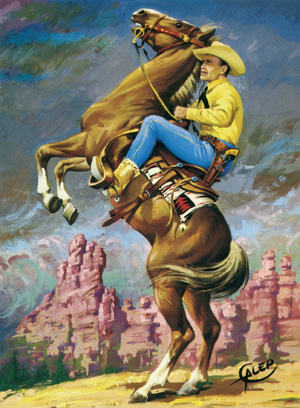 In 1947 he resumed his activity as an illustrator with a series of albums for "L'Intrepido", including: "Il clan dei vendicatori", "Il corsaro gentiluomo", "Il giustiziere invisibile", "La perla azzurra". Moreover, he illustrated books such as "I tre moschettieri", "La maschera di ferro", "Le mille e una notte", "Il barone di Münchhausen" and "Pinocchio" (the latter as a comic-strip). At the end of 1947, Galleppini established contact with the director of the "L'Audace" press, suggesting a resumption of his activity at L'Audace. He thus began to illustrate the fortnightly magazine "Occhio Cupo" and the weekly issue "Tex", the scripts for which were written by Giovanni Luigi Bonelli. Tex marked a turning point in the artistic activity of Aurelio Galleppini, who thereafter devoted himself body and soul to this publication, except for brief and exceptional pauses such as the tale "L'Uomo del Texas", which was created in 1977 with a script by Guido Nolitta for the series "Un Uomo, un'Avventura". Galep created all the artwork for the Tex stories single-handedly for a good many years, until the enormous expansion of the publication called for the assistance of other illustrators. However, he designed all the Covers of the series right up to issue number 400. A devotion (indeed, virtually a symbiosis) broken off only when Galep passed away in Chiavari (Genoa) on 10th March 1994.