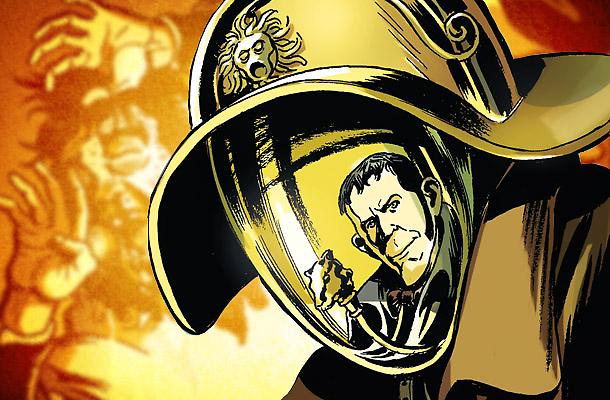 Mercurio has no enemies, just adversaries. Our professor considers even the worst criminal as a new challenge to take on, an intricated tangle that he needs to solve, and that all he's interested in, apparently.

Tarcisio Spada is Mercurio's sworn enemy. Once in the role that now pertains to Ottone, he betrayed his mentor because he believed to be better and cleverer than Mercurio. Tarcisio studied the mind and the ways to corrupt it. Using hallucinatory gasses, he caused damages to himself and Mercurio alike. They are both victim of chronic hallucinations. Tarcisio and Mercurio are fighting a perennial mind game, that will go on until one of them will surrender.

L'Infelice ("the Sorrowful One") is the most terrifying of Mercurio's enemies. A philosopher with no name, he has been sadistically disfigured by some French soldiers, who changed his mouth into an eternal grimace. According to his thought system, humans can only reach the truth when they're in a permanent state of unhappiness. And the goal of Infelice is to make all the humankind reach just that.

Pasquino, the epigrammatic and mysterious poet, leaves his satirical poems against the Pope and the powerful at every corner of Rome. Mercurio is fascinated by his figure and almost admires him. He'd like to know something more about Pasquino, starting with his identity.

Il Contrappasso ("Retaliation") is a sinister criminal who dons a mirroring mask. Following a moral code of his own, he turns their guilt against his victims as an act of justice.

Cassandrino is a Roman mask. Mercurio first meets him in the guise of a marionette, then as a human being. He appears to know everything about our hero. But who is Cassandrino, actually? A mask from the Commedia dell'Arte or someone who amuses themselves by playing it?

Il cuoco mascherato ("the masked cook") launches a challenge that Mercurio can't resist: he needs to find out the secret ingredients of his recipes. The only condition to this game is that flavors are the only things that matter and the cook's identity must remain unknown and protected by the armored door of his kitchen.

I Luperci are a sect that practices the Lupercalia, the ancient Roman purification rituals that have been abolished 1400 years ago. Their members revisited those practices for their evil purposes. Considering themselves as the direct descendants of Romolo and Remo, they wear wolf skins, increase their strength with an superhuman training, and cover their body in grease. Tarcisio has been able to use them to his goals and against Mercurio.