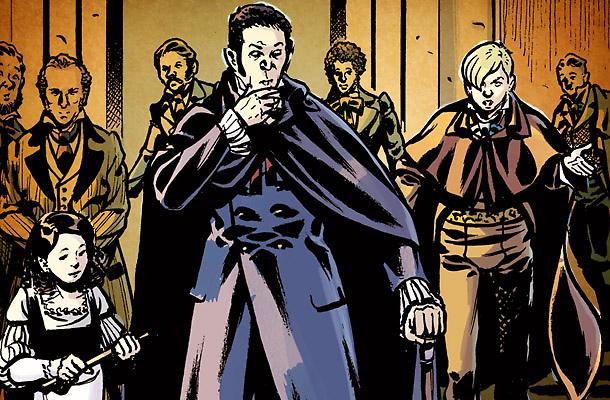 The grim assistant, a quirky colonel, a prodigy child, and the old mentor… It's enough to take the limelight away from a hero who has no intention to be left aside!

Ottone De Angelis is Mercurio's university assistant, who's unwillingly dragged through the streets of Rome at night, in violation of the Pope's curfew, following an adventure, a mystery, or even just a suspicion. Behind his grim face, Ottone is a kind man. But in his past as a member of the Carbonari, he committed an atrocious crime, killing an innocent while he was trying to murder Mastro Titta, Rome's chief executioner. He's trying to emancipate from Mercurio's stifling and protective figure, who sees him as his protégé. But at the same time, he would like to run away from himself and his guilt, that makes him increasingly more tormented and brooding.

Belforte, the Colonel of the Papal Carabinieri, was an impulsive and quick-tempered man before a criminal called Contrappasso (i.e. "Retaliation") slit his throat, cutting his vocal cords. Unable to speak, now Belforte is a mild and reasonable man, often lost in his thoughts, and at the same time an interesting adventure-mate, that keeps Mercurio in high esteem.

Galatea is the mysterious prodigy child leader of Sciarada ("Charade"), the secret society that wants to reveal all of Rome's secrets. They often ask Mercurio for help. We don't know much about Galatea, except that the girl often appears to beat even Mercurio in intelligence.

Captain Farnese is Belforte's assistant. A pedantic and fastidious young man, he wants to show-off and exact respect for the law and rules, while confronting criminals who have no intention to do so.

Ercole is Mercurio's loyal servant. He's been with him since Mercurio was a child, and they share a very close, almost father-son relationship. A terrible trauma hovers over Ercole's past, making him anxiously afraid of the adventures that Mercurio loves so much.

Adelchi is Mercurio's confidant, his life mentor, and the only one who can read his deepest feelings and say the right word at the right time. And Adelchi is his barber.