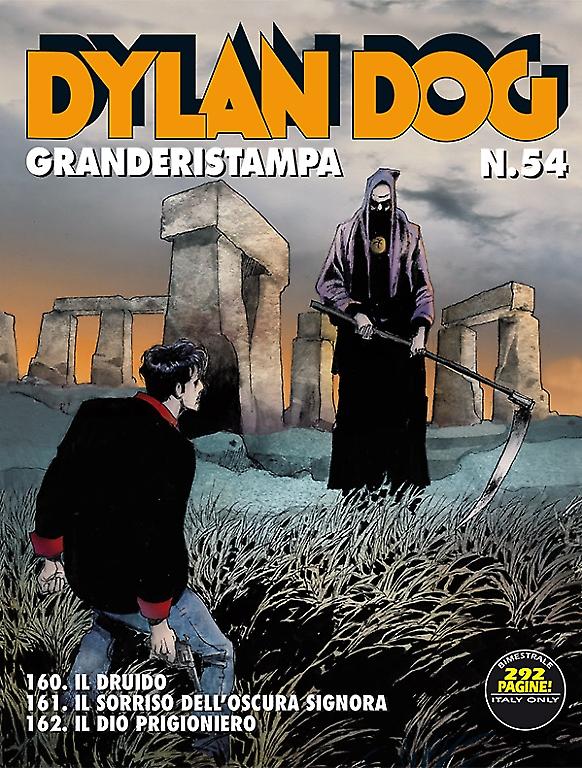 What is it that’s wandering around the field of Ancient Rock? Everyone calls him the Druid, the priest of ancient blood-thirsty divinities. He feeds on hatred and incites feuds and grudges in the small village, he’s a murderous ghost that celebrates an eternal fertility rite. Dylan Dog has to face the most obscure power of nature itself, gods of the earth that grant men the fruits of the harvest… But in return they demand a tribute of blood!

Jarvis Claydon is terrified by the future and by the premonitions of death he bears within him. The beautiful Loreen has enslaved him, by imprisoning him in her fortune-teller visions. But even she doesn’t know what is really hidden in all our tomorrows. Jarvis’s destiny is closed within a grotesque labyrinth, half tragedy, half farce. It hangs from the lips of life, pursed in a sinister smile…

Jody is the only one who manages to speak to Him, the giant of the depths, the tentacular marvel imprisoned in the marine amusement-park of Neptuneland… Little Jody can hear his voice and his pain. He knows about the villainous plots being woven by Admiral Heine and he knows how to stop them. But in order to do this, he has to unfurl his power in the waters of the ocean… He has to be set free!