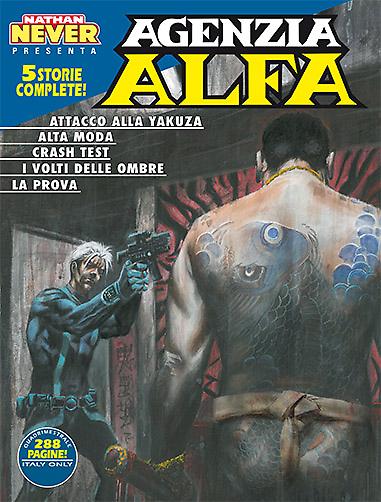 The consequences of one of Legs and May’s past cases, force Agenzia Alfa to confront the fearful Japanese Mafia.

Some important models realize they have given away their precious jewels to an unknown person. Who is this man? And what are his baffling powers? That’s what May Frayn will have to find out...

Some mysterious accidents involve the workers of a factory of deluxe cars. Branko and May are entrusted with an investigation that will take them to uncover a surprising reality!

Dr. Herschfeld, the psychologist of Agenzia Alfa, has the task to evaluate the mental condition of a dangerous serial killer. The confrontation between the two man will have unexpected consequences...

Kay, the young telepath that became a member of Agenzia Alfa, is summoned to the Telepath Temple to prove her natural talents. Other women like her will join the test, and each one will have to find out something new about her powers...