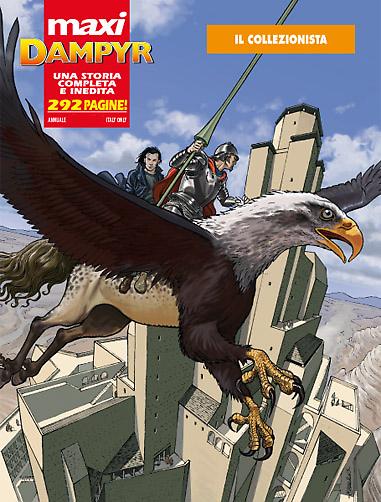 Introduction: At the World's Crossroads, someone is hatching a lethal trap for the Dampyr...

Between the mists of the Scottish Highlands, Harlan Draka and his companions faces what appears to be an ordinary adventure, facing a group of undead that haunt an old castle... But nothing seems to go their way...  In a seemingly meaningless chaos, nightmarish creatures appear— the Nocturnal, who can vanish as they please, voodoo dolls pierced through by pins, sphinxes offering puzzles to solve, etc... But the strangest thing of all is that their undead enemies can are unaffected by the sunlight! And the truth is that Harlan, Kurjak and Tesla unwittingly fell into the game of Alel, the Collector, an immortal and invulnerable demigod who owns and rules his own private universe— there, he is almighty and has the power of life, death and transformation over every living creature. To get out of there, our friends will have to ask the help of an attractive she-demon and a flying knight from the pages of Ludovico Ariosto...