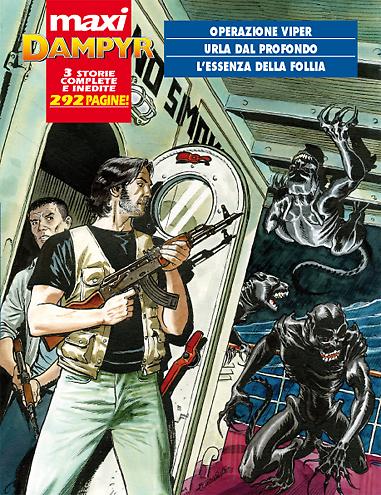 Introduction: A new horror from Temsek, a village besieged by dark forces and a scent that can bring to madness!

A disgusting Temsek experiment on a Caribbean island... In the middle of a hurricane, Harlan and Kurjak, on board of a cargo ship, will have to fight the fury of the elements and the horrors unleashed by ”Operation Viper”!

When the divers of the salvage tug “Orion” find the wreck of the “Graceland”, a ship of the Puritan Pilgrims sunk in the 17th century, the horror begins! The quiet hamlet of Halleck Island is threatened by dark forces and only Harlan and the local Marshall find the strenght to fight against an ancient curse! L'essenza della follia
Plot and script: Diego Cajelli
Artwork: Alessandro Baggi

Grasse is a French town renowned for its perfume makers... One of them, the amiable Louis, is suffering for a strange amnesia and bizarre visions haunt him. Two demonic persons want the recipe of a dangerous perfume from Louis, following the orders of General Zafon, of the Hell Army...