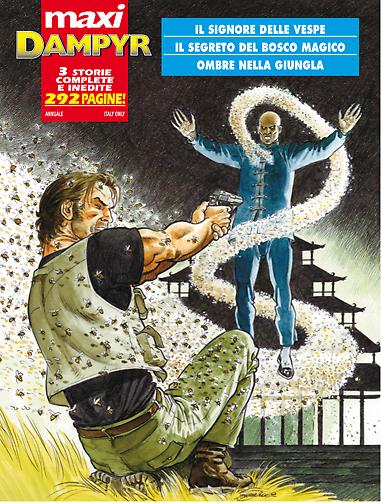 Introduction: A demon living inside an old vessel, a magical wood, and a jungle infested by vampires...

A horrible legend about the “Thousand-spiked Demon from Hell” becomes true in Brighton, England, where the ghost hunter, Maud Nightingale, with his friend Utterson bought the wrong thing at an auction of old artifacts. Caught in the middle between killer wasps and ruthless Chinese gangsters, their only hope is the Dampyr’s help...

Who doesn’t know Bomarzo’s “magic wood”? But what’s its real secret? Two self-appointed American alchemists try to find out, performing human sacrifices in the park created by Vicino Orsini. But they make a mistake when they use the Dampyr’s blood...

Undeads have been seen in the forest of Pantanal, and they appearingly formed a pack without a Master... Harlan and his friends descend the river, to face one of their most dangerous adventures …