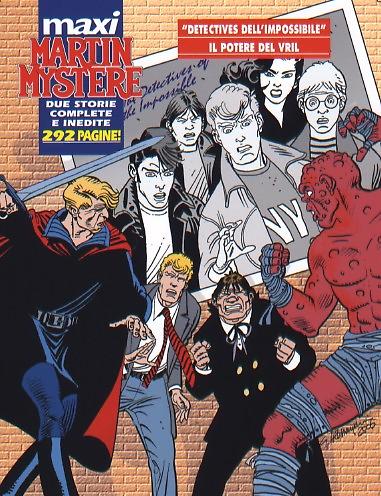 Introduction: A meeting among old friends is a cover for a bitter vendetta. Adam, the first Man in Black, clashes with the Master of Celaphas!

Martin gets a strange phone call that leads him towards a curious “meet-up back at home” with his old high school buddies. Unfortunately, though, it isn’t an opportunity to have a great time together with a bunch of old friends: an ominous menace surfacing from the past looms over them, determined to wreak vengeance on a bunch of kids who foiled the very same threat years before – kids who used to go by the name of “detectives of the impossible”! Also from the past are the figures Martin finds himself working with in the second adventure: namely, Adam, the legendary founder of the Men in Black in the age of Atlantis, accompanied by his long-time friend, the mutant Korg. The two have been dead for thousands of years, but they’ve come back to life in the form of holograms to undertake a desperate mission: they’re planning to embark on a clean-up campaign amongst the Men in Black, who are guilty of having strayed from their original mandate that consisted in protecting mankind against every form of danger. But while Adam’s on this crusade, he makes the acquaintance of a figure Martin Mystère had already come across some time earlier, and who had most unequivocally died: the sinister “Master of Celaphas”. Who is the man who has now taken on that name and that appearance? And who is concealed behind his mask?