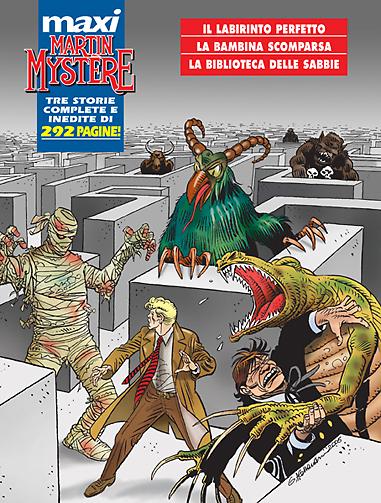 Introduction: The last creation of a deranged architect. Nightmarish beasts. And creatures arriving from the stars!

The perfect labyrinth Subject and Script: Riccardo Borgogno
Martin finds himself involved in a veritable race against time to save the life of Diana, who is being held prisoner in a preposterous labyrinth without any way out!

The missing girl
Subject: Lorenzo Bartoli
Script: Luca Galoppo
The Detective of the Impossible is enjoying a well-deserved period of rest in a skiing resort, but “mysteries” give him no respite even on the snow: he comes across a strange young girl apparently endowed with paranormal faculties, who arouses the attention of the Men in black…

The library in the sand
Subject and Script: Stefano Vietti
An ancient book provides clues to a library that’s lost way out in the desert of Mauritania. A journey that leads Martin and Java to make the acquaintance of an curious ancient organization called “the guild of hunters” !