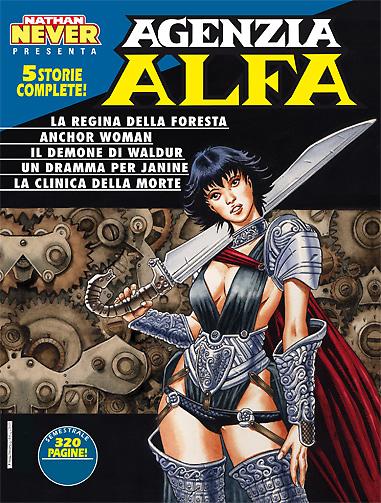 Introduction: Five adventures in this and other worlds for the Alfa agents!


May is sent to the African forests to try and stop some ruthless poachers. The truth hidden behind the massacre of the innocent beasts is far different, and the Alfa special agent will need the help of a living legend... Dawa Eghenghi!

Alexandra Sterling is a very popular TV anchor. After being kidnapped, one night, she’s found alone on a street, with a badly scarred face. For her, it’s the beginning of a new life, where a terrible secret is hidden, and only Nathan Never will be able to disclose it...

Many years ago, Legs Weaver conctacted an alien space probe, from the faraway and lost planet called Waldur. Thanks to the powers of that machine, Legs became Sonja, a legendary warrior. Now, the archive of the stories told by Legs, and managed by Kay, May’s adopted daughter, has a new adventure to present...

Janine Spengler, the secretary of Agenzia Alfa, finds herself in big trouble: kidnapped by women traders, she’s imprisoned in the abyss of the second level of the City. Nathan Never manages to find her, but their escape will be a dramatic one, revealing to both of them an unknown side of their personality...

Sent to the Easy Beauty clinic to investigate some strange deaths, May Frayn will find that sometimes a diet can be lethal!