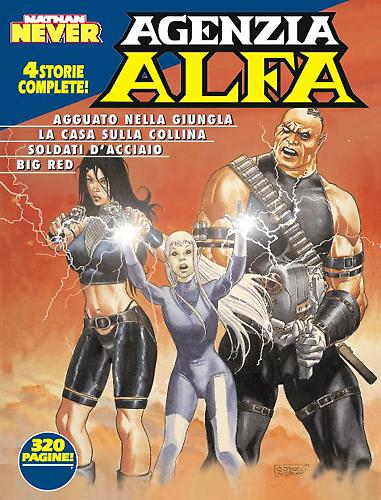 Introduction: May, Branko and Kay. A family of heroes, confronted with four intricate cases!

Agguato nella giungla
Plot and script: Lucio Sammartino
Artwork: Elena Pianta
May is going on a mission in the jungle near the Southern Territories border to help Major Joanna Gleason, a childhood friend of hers. They need to stop an illegal traffic of military biotechnology, set up by Enrique Nagra, first love of the charming agent Alfa…


Young Kay and her friends decide to become improvised investigators to solve a mystery about an abandoned house. Some time before, it was the theatre of the killing of one of their schoolmates’ father, and now has become the HQ of a gang of novocaine pushers.

I soldati d'acciaio
Plot and Script: Stefano Piani
Artwork: Pier Gallo
Branko and May are facing an army of deadly robots, stolen from a military lab and now controlled by the dangerous international terrorist, Tarek Douglas III;.

Big red
Plot and Script: Stefano Piani
Artwork: Francesco Rizzato
May is involved in an Old World country adventure– she’s called to investigate the stealing of a giant vegetable from the mansion where Lord Chester Whoodhouse lives with his unusual family. And there are only few days left, before the annual Springfield Fair.