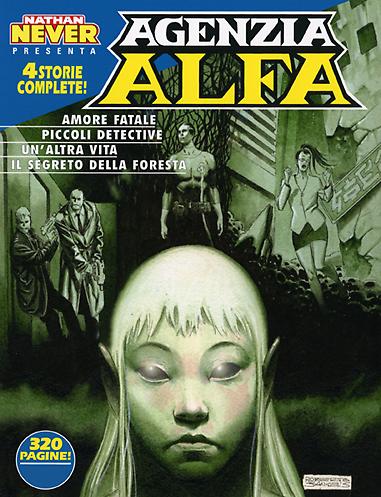 Nathan and Branko the mutated have a job to do: dealing with the case of a mysterious murderer who kills his victims after drawing inspiration from the lyrics of a well-known twentieth-century vocalist.

Kay, the little telepath that Branko and May Frayn adopted as their daughter, gets caught up in an investigation into the disappearance of a young boy who goes to the same school as her. Another life
Subject and script: Alberto Ostini
Artwork: Simona Denna & Francesca Palomba

A traumatic homecoming for Janine, Solomon Darver’s alluring secretary, who gets embroiled with the various oddballs and weirdoes populating the seedy areas on the lower levels of East City.

The secret of the forest
Subject and script: Michele Medda
Artwork: Andrea Mutti

The android Link is sent into the Border forests to shed light on the disappearance not only of several scientists but also of the military units that had been sent on a rescue mission to look for them.