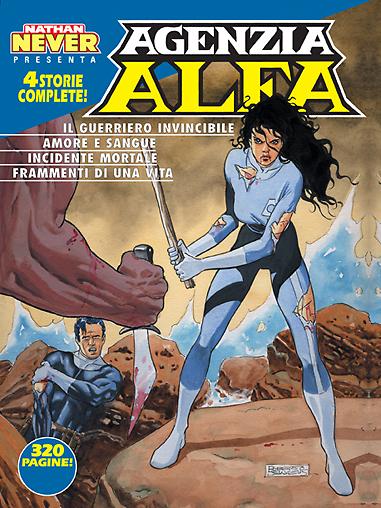 Il guerriero invincibile
Plot and script: Antonio Serra
Artwork: Elena Pianta
A comeback for the dynamic Ross twins, where you’ll get to hear about their startling and really shocking origins and their connection with a “top secret” experiment for the creation of a weapon designed to be the final solution, the “super soldier”…

Amore e sangue
Plot and script: Stefano Piani
Artwork: Francesco Bastianoni
The protagonist of the second episode is Andy Havilland, this time trying to get to grips with Lula and Mickey a ruthless pair of romantic criminals à la Bonnie & Clyde, who are terrorizing the entire country…

Incidente mortale
Plot and script: Stefano Piani
Artwork: Gigi Simeoni
A private investigation for friendly Mendoza, Agenzia Alfa’s chief mechanic: he’s got to get someone out of trouble - an old “flame”, actually, who wants to know how her most recent husband died…

Frammenti di una vita
Plot and script: Angelica Tintori
Artwork: Andrea Bormida
In the hostile environment of a desert island, a relentless chase in pursuit of a dangerous murderer gives May an opportunity to reconsider her lifestyle…