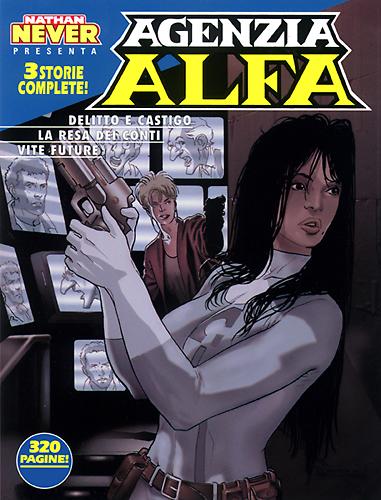 Introduction: May, Luke, Sigmund: three people grappling with the quirks of destiny. But is it really only Chance that is about to throw their existence into pandemonium?

Delitto e castigo
Plot and script: Angelica Tintori
Artwork: Andrea Bormida
May Frayn reaches the final show-down with the ruthless Rena Leblanc, the sister of her one-time boyfriend (and one-time thief) Raul. An acrimonious and unforgiving clash breaks out between the two women, and the consequences cannot fail to be lethal!

La resa dei conti
Plot and script: Stefano Vietti
Artwork: Andrea Mutti
Luke Sanders continues to dig into his past, and the discoveries he ferrets out don’t all prove to be positive! And the shadow of Mister Alfa begins to extend over his life, changing it for ever!

Vite Future
Plot and script: Gabriella Cordone e Alberto Lisiero
Artwork: Fabio Jacomelli
A frightful accident, and Nathan Never finds himself on his deathbed in hospital. No chance of saving him: Sigmund, who was with him, feels responsible and desperately looks for a way to get his friend back. But around him, nothing really is what it ought to be…