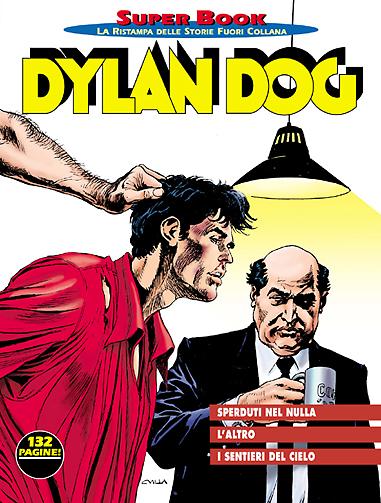 Introduction: Virtual worlds, monsters that feed on nightmares and dream-like places on the borderline of reality!


Lost in the middle of nowhere
Subject and Script: Giuseppe De Nardo
Artwork: Luigi Piccatto
Virtual reality, another devilish technological thingamajig! But what else is to be expected from the state-of-the-art amusement park of Wonderland? Dylan Dog sets off on a trip into a simulated world, created by Doctor Drummond’s powerful machine. A trip that immediately becomes a nightmare, when things and people are thrown into disarray by a strange madness…

The other one
Subject and Script: Pasquale Ruju
Artwork: Luigi Piccatto
It is conceivable that the obscure and restless half that lives inside each one of us may suddenly become predominant. But the one inside Dylan feeds on nightmares and is thirsting for blood! Who can stop it?

Pathways through the sky
Subject and Script: Luigi Mignacco
Artwork: Luigi Siniscalchi
Welcome to Heaven’s Door, the Paradise of your dreams, where you’ll be able to fulfill all your desires and defeat all your deepest fears that you have shrouded in silence!