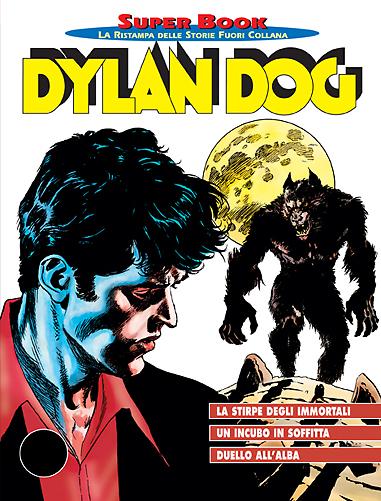 The indefatigable … A strange, ancient myth springing from the pen of a crazy prophet. Only one among the immortal sons of Enoch can tread on this Earth, only one of them shall survive the eternal struggle. Is this what lies behind the crimes at the university? Is this the force that has unleashed the horrendous monster who’s butchering students? Amid ancient manuscripts and modern atrocities, Dylan Dog is on the hunt for a being that does not fear death, a being ready to pounce and masquerading behind a human appearance!

Is it a giant cockroach? A many-headed snake, a carnivorous toad? Nobody knows what on earth it might be, that nightmare Alvin discovered in a crack up in the attic. But what everybody knows is that it must be gotten rid of, because the mere thought of it send shivers down your spine… Somebody with the skills of the trade must be summoned forthwith, somebody like Dylan Dog!

Shoot, Dylan, shoot! It’s one or the other: if you don’t, then he will. And that’ll be the end. What a dreadful situation for a tender-hearted ghost hunter, challenged to a duel by a jealous husband. Blame it on the fog that drove you to the castle, blame it on gorgeous Alicia who seduced you and led you by the hand into … a ghostly joke?