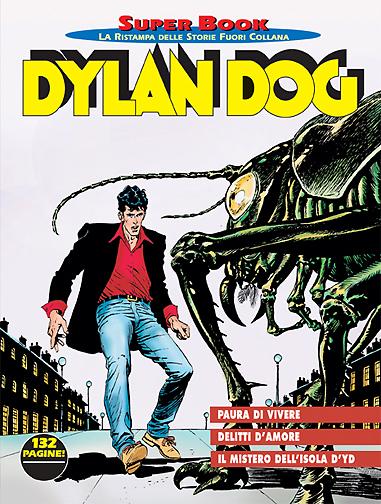 Introduction: What is more difficult? Loving, living or dying? These are questions – at least the last one is – for which there is no answer. But they’re questions Dylan will never cease to brood over…

The murderer and the detective, two figures that track each other, meet and merge into a blur. Dylan has recognized the monster’s hands, he has felt the icy breath of the monster on his own skin, and he feels a wild raging fury welling up in his mind. Now here he is, helpless as he stands looking down the barrel of his pistol… Will he manage not to pull the trigger?!Plot and script: Tiziano Sclavi
Artwork: Bruno Brindisi

The mystery of the Island of Yd

The mystery is elementary to solve, dear Dylan. Match up the numbers and the letters, solve the riddle, grasp the meaning of the clues in a flash. But if you want to escape from the island of Yd you’d better hurry, because at any moment now… Game Over! Plot and script: Tiziano Sclavi
Artwork: Enea Riboldi

It’s your father, Franz, his shadow. Franz Krod is terrified by everything: every single step, every single breath is an angst-filled effort. Shyness and fear keep him aloof from people and deprive him of any joy. His spirit is crushed for ever by the memory of a dominating father. But change is afoot: a murderous force begins, one by one, to remove the obstacles that stand in his way. The death of others is the only way to vanquish… the fear of living!