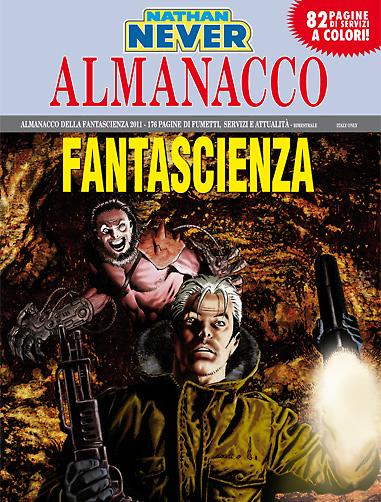 Introduction: In the Deer Horn Mountains, Nathan will be face to face with a ruthless killer!

The accidental death of young Shawn during a chase hits Nathan deep down, driving him to take shelter in the Deer Horn Mountains to face the psychological crisis that’s shaking him. Here, he’ll find a new case to solve… after the cruel killing of his mother, young Thomas Gunners disappeared. Searching for the kid, the Alfa Agent will cross paths with a terrifying monster known as The Butcher… This year’s Almanacco also features colour files about the movie sensation of George Pal, Kurt Vonnegut’s absurd universes and the disquieting legion of the Men-Beasts, as well as the usual overview of sci-fi books, movies, TV series and videogames of 2011.