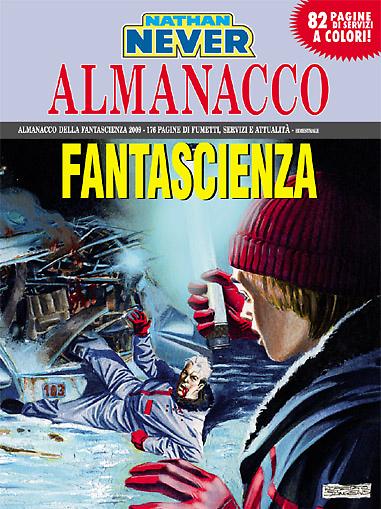 Introduction: The darkness is all around Nighthole, and the ghost of a dead girl roams the obscurity, killing people!

For the people of Nighthole, in the Northern Territories, came the moment for their traditional migration: a darkness is beginning to fall over the town, and the days will be gloomy for six long months. Not all the people, though, are leaving their houses: ten persons or so will stay there to “hold the position”, fighting the freezing conditions to keep the town operative. One of these people is Sheriff Marika Wells, a clever and sturdy woman, who already has to face an emergency during the first day of darkness: to rescue a flyer that went down not far away from the town. The pilot taken out from the rwecks of the flying machine is Nathan Never, who introduces himself to the Sheriff not as an authoritative Alfa Agent, but as a dull estate agent called Ned Newman. Meanwhile, in a almost pitch-black environment, caused by one of the frequent black-outs, strange murders begin to happen in Nighthole… Many people is ready to swear they have seen Rachel, a girl who died in an accident only a few months ago… The 2009 Almanacco also features full-colour stories about space Empires, Ray Harryhausen’s special effects and the Alien saga, as well as our usual overview of books, movies, TV series and videogames of the Sci-fi Year.