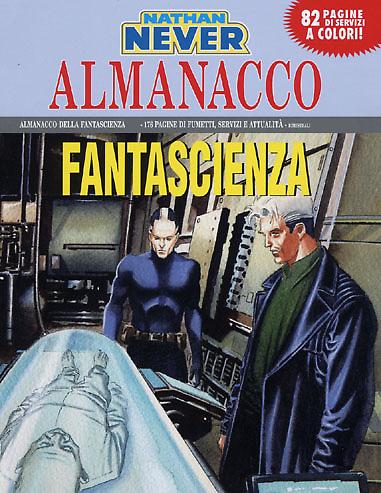 Introduction: A harsh spy clash is undergoing between Mars and the Earth, while in the dark the Praetorians conspire!

On a mission to Mars, Nathan and Branko must pick up the former agent of Mars secret services, Petronius Briggs, and take him out of the planet: once safely delivered, the man could give the Earth Intelligence crucial information, like the name of the double-crossing high-rank officer who's giving top secret reports to the Praetorians. Agenzia Alfa will find itself involved in an intricate spy game, where Nathan will be forced to doubt about anyone… about his teammate in the operation, too— charming Major Elena Shanjenkova. This year's Almanacco also features: files about “imaginary” metropolis; Arthur C. Clarke, the writer who explored the Infinite; Transformers, Power Rangers and other “game heroes”; and books, movies and videos of the Sci-fi Year.