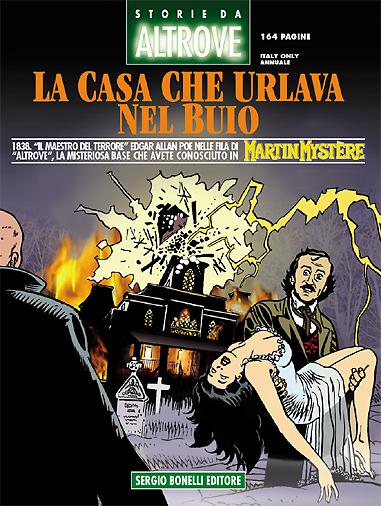 Introduction: Yet another enigma from the past for "Elsewhere"! A mysterious bloody trail linking Paracelsus with Edgar Allan Poe!

Year 1541. In Salzburg, Austria, the body of a deceased man is laid in the crypt of a church. Before dying, he gave strict orders not to be interred. Several months later, one of his servants sneaks into the crypt to carry out his master’s last will: the testament of Philippus Theophrastus von Hohenheim, the alchemist also known as Paracelsus! Year 1838. A cruel murderer endowed with superhuman strength takes refuge in the United States, after leaving a bloody trail behind himself in Europe. The killer appears to be almost indestructible, and this immediatily draws the attention of “Elsewhere”, the secret government base where all kinds of paranormal activities are examined. The unusual detective Dupin already is on the “monster”’s tracks, but when he loses the killer’s trail, “Elsewhere” sets a new investigator on the enigma: the mysterious ”Agent Raven”, code name of writer Edgar Allan Poe!