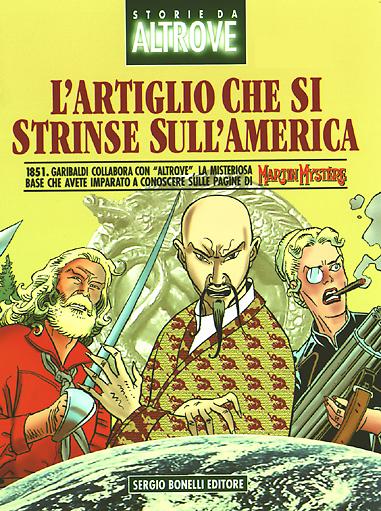 Introduction: Revelations from the secret archives of "Elsewhere": another case beyond the limits of the impossible, an epic mission entrusted to Giuseppe Garibaldi, a story you won’t find mentioned in history books!

The United States, the location - its exact whereabouts being only hazily indicated –of the highly mysterious “Elsewhere” base, the Year of Our Lord 1851. A series of circumstances leads the government Administration, held in the firm grip of a terrible “Steel Lady” who’s called “Papà” by her subordinates, to enroll a fighter of most exceptional audacity and daring among her agents, Giuseppe Garibaldi, “Joseph” to the iron-willed mistress of “Elsewhere”. His brief is one of the most sensitive: to cross China, which is being ravaged by revolts and wars whereby the various Tongs are pitted against one another, and kill the mysterious “Spider”, the head of an extremely powerful esoteric sect whose intrigues even cast their sinister lengthening shadows over the American democracy…