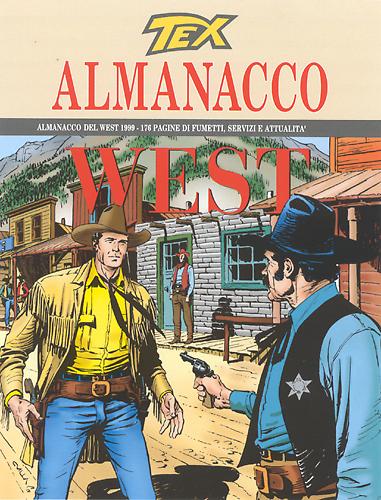 Introduction: Tex in a complete 110-page comic strip: "La montagna del mistero". Everything about the books, movies, videos and CD-Roms of the year. Emilio Salgari and the Prairie Tigers. The legend of the Lone Ranger. Clint Eastwood, the last of the tough guys. 176 pages along the wild trails of the West!

The Almanac offers you all your favorite features with reports on the books, movies, videos and CD-Roms of the year, but what makes this issue really special are three interesting articles: one on Emilio Salgari’s novels set in the Wild West, one on the legendary figure of the Lone Ranger, and one on the great actor Clint Eastwood. In the comic strip story, which is set in the Rocky Mountains, Tex has a look inside a wretched cabin and finds gold dust residue beside the corpse of a young woman, Lory Culter. The investigations start out from nearby Reddock, where everybody suspects Danny Il Matto, the secret and abandoned son of Judge Atherton, who has been kept hidden away in a remote locality because he is mentally disturbed. What role does the sheriff have in this squalid affair and who was it that stabbed poor Lory to death?