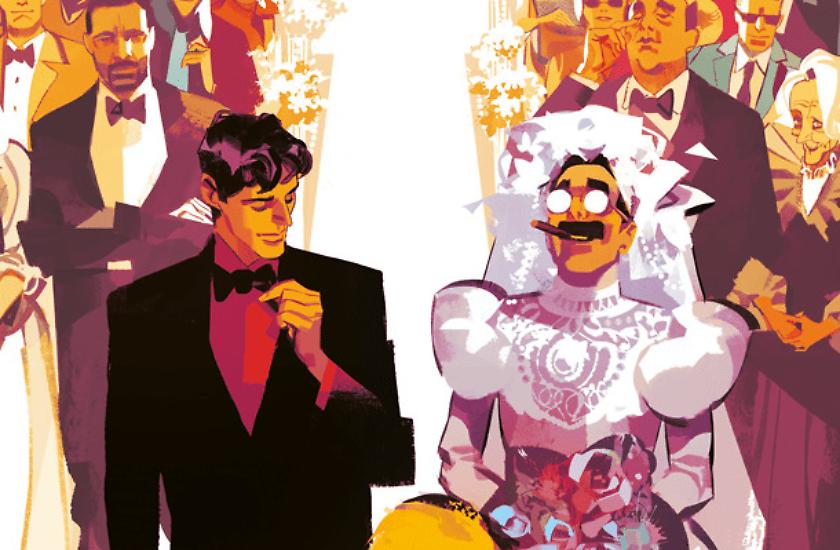 After a Lucca Comics and Games convention as wet as intense and full of satisfaction, here's the eagerly awaited November/December edition of our Giornale di Sergio Bonelli Editore Online. The next two months will offer many special albums, but Dylan Dog immediately steals the show with two epoch-changing events you don't want to miss. In November, it will be time for a wedding ceremony and skull-shaped rings - unable to stop an accident of cosmic dimensions such as the terrifying meteor hitting the Earth, the Nightmare Investigator chooses to face the inevitable Evil with an act that is as crazy and inconsiderate as it is full of positivity: a marriage... His marriage! In "Oggi sposi", you'll find out what happens but, Dylan being Dylan... expect the unexpected! One month later, it's time for an Apocalypse, "celebrated" with a spectacular n. 400 in full color, that promises surprises and sparkles galore! In the surprise department, you can find the four (four!) different covers we created to celebrate this incredible milestone. If you want to know something more about it, please follow our website!

There is plenty of news in Tex's world, too. Along the usual Tex Color (with five short stories, as lethal as a Colt's bullet), Tex Willer will have his first quasi-fight against Mefisto (on the monthly series about Tex as a young outlaw). But he will have to face the ghosts that haunt an isolated shuck on the Uinta Mountains, in a story with a Christmas atmosphere, in the first Speciale Tex Willer that will be at your newsstands in December. An unusual album, with surprising and unconventional colors. The tenth Color Zagor is in full color, too. "Doc" Lester, the dentist-turned-trapper, takes the stage, going with Zagor and Cico on the tracks of the blood-thirsty creature called Witiko by the Natives of the North! In November, it's time also for Dylan Dog Color Fest n.31, with a self-concluded story.

Again, still talking about our full-color series, you will find n.2 and n.3 of the second series of Martin Mystère Le Nuove Avventure a Colori (with new "remakes" of Martin's great classics) and the first two issues of Odessa: Rivelazioni - the second narrative arc of our Science-Fantasy saga debuts with an extraordinary cover you don't want to miss! Then, our traditional appointment with Dragonero Magazine: 176 full-color pages, with two unpublished-before, complete stories, and an abundant supply of articles and files about the world of Fantasy! Also, about the hero created by Enoch & Vietti, the November album is the perfect occasion to start reading the adventures of Ian Aranill and his company: the Dragonero monthly series gets the subtitle "Il Ribelle", and begins again from n.1! The readers who followed our hero's adventures in the last months know the reasons that urged Ian to turn from a loyal scout of the Empire into a fierce opponent to those who reign over the Erondàr. We invite you to enjoy the new, fascinating atmospheres of "Dragonero Il Ribelle", with the spectacular illustrations created by the series' new cover artist: Gianluca Pagliarani!

Morgan Lost is back, too, with a series called "Night Novels": we are confident that again Claudio Chiaverotti will be able to keep you glued to the pages with his crazed and disquieting world.

Lastly, in December, it will be time for Nathan Never's 30th Speciale (with the finale of the long and articulated Darkness Saga). But there will also be the beginning, on the monthly series, of a nine-episode mega story, written by Michele Medda and Bepi Vigna. "Intrigo Internazionale" will be a shock for the life of our Alfa Agent, with a series of dramatic events, and traumatic breaks with his past!