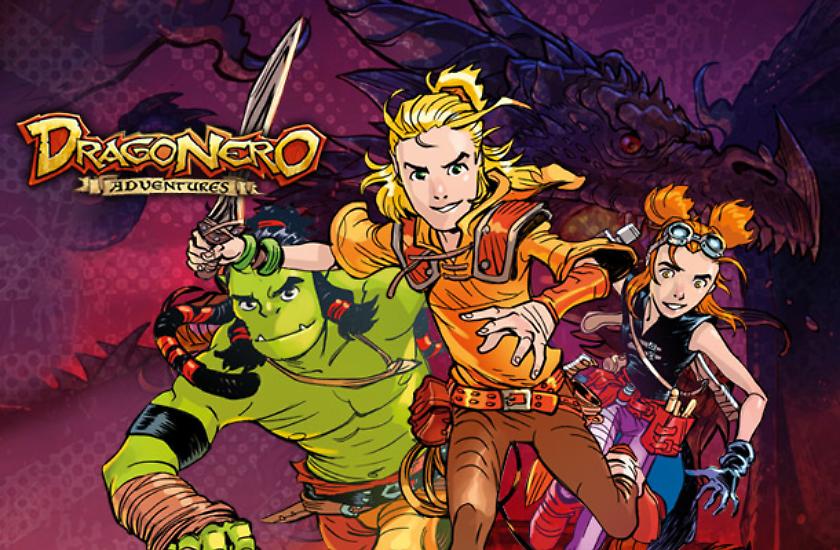 This Autumn under the sign of Sergio Bonelli Editore promises to be full of hot surprises. The temperature will rise immediately, with the debut of our new line of stories for young readers. The honor of launching this important initiative will go to Luca Enoch & Stefano Vietti: they “snatched” the three beloved heroes of their Dragonero , Ian, Myrva, and Gmor, from the regular series' pages, to narrate the wild adventures of their childhood. “Tre giovani eroi” is the befitting title of the first issue of the new monthly album Dragonero Adventures, in an unprecedented 64-page, soft cover format, in full color. In the first story, with beautiful art by Riccardo Crosa (who also created the character studies and the energetic covers for the series), the unstoppable trio roams a rural county in Erondàr... but the peace is broken when they find a mysterious underground building. It is just the beginning of an adventure that will occupy the first issues of the monthly series, where our three young heroes will immediately have their hands full: they will face wizards, magic formulas, enchanted portals, goblins, warlocks, and as fascinating as dangerous creatures of every kind. You don't want to miss it!

But Autumn will bring along another long-awaited event! The comic adaptation of the novels by one of the most popular writers of the moment: Maurizio de Giovanni. His most famous literary creature is Luigi Alfredo Ricciardi, the hero of “Il senso del dolore,” the first installment of the tetralogy “Le stagioni del Commissario Ricciardi.” Set in 1930s Naples, the short story revolves around a police commissary who investigates a string of bloody murders in the city. But Ricciardi has a special gift, and a curse at the same time: he can see the people who died a violent death, and collect the testimony of their last moments of life. De Giovanni's book series already has millions of readers, and now our Publishing House is honored and pleased to take it to your newsstands in a comics' version, every four months.

But our unique projects do not end here, of course. Morgan Lost debuts in a new formula: a different and nimbler format, with a stricter continuity of the stories. And it's again "Color" time, for Tex and Dylan Dog. The Ranger will don the autumn guise of his color series, with several different writers and five complete stories. Dylan Dog's album will feature one story, under a special cover by Grzegorz “Thorgal” Rosinski! Zagor will have his Color album too and, starting from this issue (the sixth) it will become a six-monthly series. Nathan Never's fans will have their share, too, with Universo Alfa n.21 (dedicated to the series-in-the-series "Esp Files") and the 28th Speciale. For the lovers of fantasy, besides the monthly album and the already mentioned "Adventures," Dragonero will also offer his Magazine, in full color, with the usual trove of stories and dossiers. Finally, we'll introduce another event-album, in "technicolor.” Dylan Dog n.375 will see the reunion of a classic dream (or nightmare?) team: Tiziano Sclavi & Angelo Stano will take the Dweller of Craven Road to shed light on a puzzling situation in… “Nel mistero”!