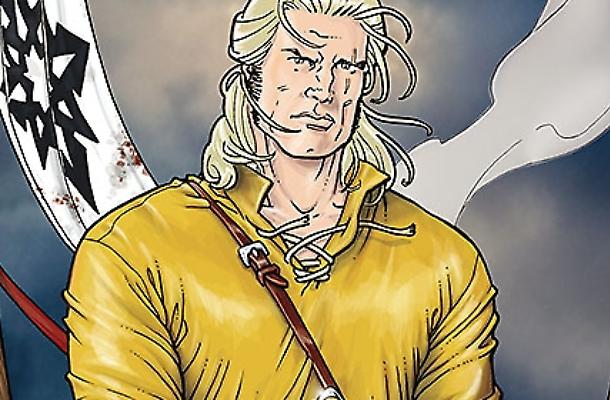 A new series takes the Bonelli readers in the unexplored lands of Fantasy: Dragonero is here!

Dear friends, as you can guess from the opening picture of this edition of “Giornale di Sergio Bonelli Editore Online”, in a few days a new character will join the large family of the Bonellian heroes and anti-heroes. His name is Ian Aranill, better known as Dragonero! Starting from June, 11 we will begin telling you his adventure in the Erondàr, a fantastic world where wizards, elves and orcs live, as well as charming and formidable creatures such as dragons, ghouls and the terrifying “Algenti”! Ian is a scout for a powerful age-old Empire, and along with his company – the brawny orc Gmor, the wizard Alben, the technocrat Myrva and Sera, of the Frondascura Elves – will be the hero of a great fantasy saga. An epic tale, born out of the imagination of Luca Enoch and Stefano Vietti, that premiered in 2007, in the pages of the first Romanzo a Fumetti Bonelli. Due to the success of the volume (now also available in a digital reprint for iPod Touch, iPhone e iPad), the authors decided to make a follow-up to the adventures of Dragonero: now, after more than two years in preparation and production, the first issue of our new monthly series comes to the newsstands’!

Dragonero’s fantasy justly deserves the spotlight in these two months, but can’t completely steal the scene from the many other initiatives of our Publishing House in May and June. Two “historical” heroes like Zagor and Tex, for instance, celebrate the publication of their respective giant books. In the album devoted to the Spirit-with-the-Hatchet, created by the Burattini&Ferri duo, you’’ be able to find out more about the Irish roots of the Darkwood King, throught the story of his mother Betty’s arrival in the new continent. In the 2013 Texone, the suggestive ink of Andrea Venturi will depict the Western epics of the pioneers, in a riveting story written by Mauro Boselli. For the sci-fi fans, Universo Alfa will see the début of Cronache di Marte; Lilith will go on in her journey through time, landing in the Belgian Congo at the half of the XIX century; while Nathan Never and co. will have to face the three adventures of the “whale", i.e. the 28th Agenzia Alfa. Three thrilling stories will be included in Maxi Dylan Dog n.19, with art by the evergreen Montanari & Grassani, as per “summertime tradition”. Before leaving with the pleasure to find out about the other publications of the next two months, we’d like to call your attention also to our Almanacco del Giallo 2013, with a new puzzle to solve for Young Julia, the usual overview of the year in crime stories, and the dossiers about the James Bond “clones”, Ken Follett and the crime cuisine, from Nero Wolfe to Pepe Carvalho.  Have a nice read!