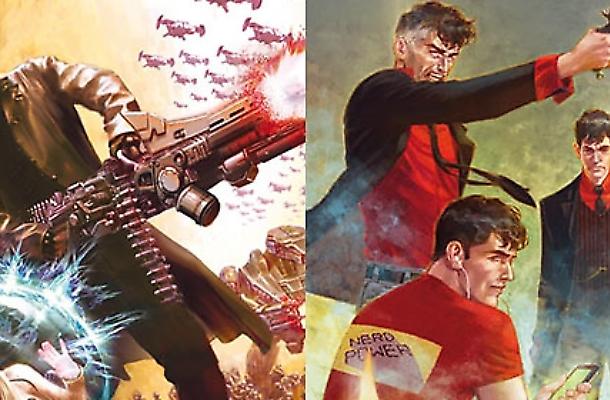 Sci-Fi and Horror take centerstage in our Bonelli spring 2013: the spotlight is on Nathan Never and Dylan Dog!

Dear friends,
welcome to the new edition of Sergio Bonelli Editore Online Journal, with an overview of all of the albums that you’ll find at your newsstand’s in March and April. For our cover, we chose to join two pictures with the characters that will draw the attention during the next two months: Nathan Never and Dylan Dog. Our Special Agent Alfa will not miss his usual sping appointment with the Gigante, that will be published in March: the n.16 of the series will include a long story, a new episode of the multi-year, tragic saga of the mutated people. In April, while the monthly series will see the conclusion of the plot centered around the robot, Omega, Nathan Never will be the leading character of the trio of exciting adventures of the Maxi.
Just like each time since a few years, when April comes, Dylan Dog’s fans know it’s time for a “theme” Color Fest. This time around, the running thread is the alternate realities, the possible worlds, the dystopian universes... a journey through "Otherwhen" that will show us four alternative versions of Tiziano Sclavi’s character: this time generated by the vision of Alessandro Bilotta, Antonio Serra, Chiara Caccivio and Giovanni Gualdoni (you can see them detailed here above, in the cover by Davide De Cubellis). The art by Paolo Martinello will show us an old and tired Dylan, who’ll face the zombies in a future world. Alessandro Bignamini will bring us to the end of the 1800, in a plot that echoes the atmospheres à-la Sherlock Holmes. The Cestaro Bros. draw Dylan as a child, who joins his daddy, Xabaras, in his kingdom of living dead, since when he was a boy. And Luca Raimondo’s pen will give us a "nerd" version of the Nightmare Investigator. All this, as usual, in a shining "technicolor"! Also, on a "dylanian" theme, in March we’ll have a new issue of Almanacco della Paura: besides an unpublished-before story of the dweller of 7, Craven Road, you’ll find 82 full color pages of files about about the “cursed stories” of cinema and literature, Neil Gaiman, the creator of Sandman, and the most spine-chilling anthological movies, as well as the usual overview on horror books, movies, TV series and videogames of the year.
Among our other titles, we’d like to point out the last issue of Shanghai Devil – with the conclusion of the dramatic Chinese adventures of Ugo Pastore, the character by Gianfranco Manfredi –, the new episodes of the series "le Storie" (set in the days after the collapse of the Berlin Wall and in the middle of the Vietnam War), the 25th Speciale Zagor, the return of the evil Myrna, Julia’s direst foe, and the new issues of Saguaro, where things get even more complicated for the Navajo agent created by the fantasy of Bruno Enna...
And you can find out about everything else, leafing through the pages of our Journal. Have a nice read!