Once again, it's a summer in "technicolor" for our Bonellian Heroes! In this July/August edition of the Journal of Sergio Bonelli we will give you a preview of seven full-color special albums! 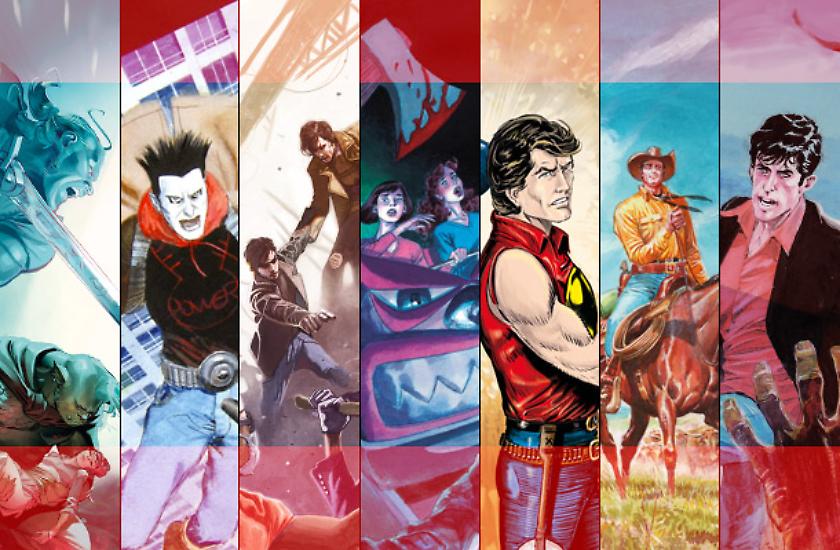 Dear Friends,
in the next two months you'll find a real "reading marathon" waiting for you, under the sign of color. In July and August, we will offer you seven, very special albums in "technicolor": you can take a sneak peek to some of these pages by leafing through the new edition of our Giornale di Sergio Bonelli Editore Online.

First things first, though. The earliest publication will be the third Speciale Dragonero, with an adventurous and thrilling story where Sera the Elf will be poised between life and death. In the third Speciale Le Storie, Corrado Mastantuono will unleash all the power of his imagination as a writer/artist. For this album, the Roman artist will take care of every aspect of the creation, with the exception of lettering and cover art. This album is entirely "made by Mastantuono", from plot and script to art and color!

How can Brendon's New England border with New Heliopolis? You'll find out about it in the pages of the visionary Speciale Brendon n.13, for the first time in full-color! And as some you may have already guessed, this adventure will feature Claudio Chiaverotti's latest comic creature: the serial-killer hunter himself, Morgan Lost!

Next on our list, the second Speciale Julia, with a new case to be solved by our young criminologist, at the times when she donned the mantle of a dynamic college student. The, you'll have the long-awaited issues dedicated to the Spirit-with-the-Hatchet, Eagle-of-the-Night and the Nightmare Investigator. In Color Zagor n.4, we will delve into the reckless past of Colonel Perry; our Texas Ranger will have to face a killer hidden among a group of cattle drivers, in the 9th Color Tex; the readers of the 18th Dylan Dog Color Fest will have the chance to see an alternative recreation of three of Sclavi's greatest classics, with three remakes by acclaimed Dylan authors: Roberto Recchioni & Emiliano Mammucari; Giovanni Eccher & Bruno Brindisi; and Fabrizio Accatino, writing for a duo of artists like Valerio Piccioni and Maurizio Di Vincenzo. The new versions of classic episodes “L’alba dei morti viventi”, “Gli uccisori” and “Diabolo il grande” are waiting for you!

If this full-color feast is not enough to bring a whiff of cool air to your scorching-hot summer, just remember that, like each month, Orfani: Nuovo Mondo will be in full-color as well. The same goes for Nathan Never Magazine n.2, in July – with four complete stories, and the usual, rich features about all the aspects of Science Fiction – and even for Dylan Dog Collezione Book n. 242!

Before allowing you to freely leaf through the new edition of Giornale di Sergio Bonelli Editore Online, let me highlight also the return of Maxi Martin Mystère, a series that collect some Zona X classics (and beyond…), our 33rd Speciale Martin Mystère (set in the lunatic 1930s), the 8th Maxi Dampyr, the new Nathan Never Annozero and the last two, enigmatic issues of the new miniseries, UT.