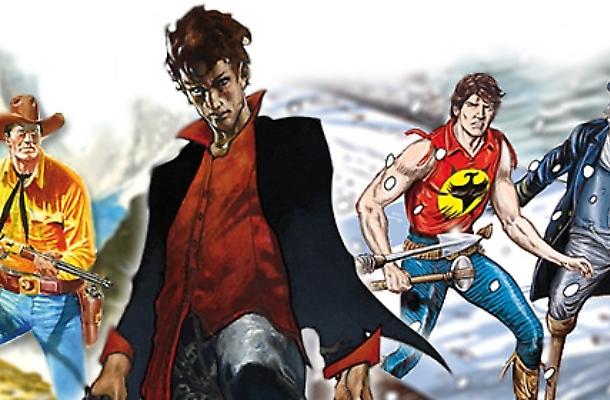 The Bonelli summer means an explosion of hues! Tex, Dylan Dog and, for the first time, Zagor in Color edition!

Dear friends, just like the pages of our renewed Website donned a more colourful attire, just in time for Summertime, the next two months will bring a chromatic explosion on our books as well. In the hot days of August, three of our most beloved heroes will give us a waft of fresh air with the publication of the third Color Tex, the eleventh Dylan Dog Color Fest and the very first Color Zagor! After having made the many Texian "aficionados" happy, by showing the Western ranges in all their shades... after the double appointment (in spring and in summer) with the full-color anthology of the Nightmare Investigator became a not-to-be-missed habit, now it’s time for the Spirit-with-the-Hatchet to try the four-color reproduction in a new series. The 128-page story we produced for the first issue looks as something designed to catch the attention of new and old readers alike: a mix of mystery and adventure, loaded with revelations about the past of one of the most beloved supporting characters – Captain Fishleg, commander of the "Golden Baby" – this album has what it takes to engross the readers!

As our most affectionate followers know, the Bonellian summer is always accompanied by many special issues. At the newsstands, in July, you’ll find the 11th Speciale Brendon, the 30th Speciale Martin Mystère (that’s a record!), the 20th Maxi Zagor, the 5th Maxi Dampyr, and the unmissable Almanacco della Fantascienza 2013, with in-depth dossiers and an unpublished Nathan Never story.

Le Storie will take us to know the many faces and places of Adventure, Saguaro will have to disentagle himself from an increasingly complicated situation, while the Dragonero companionship carries on its journey in the Erondàr, with its many dangers and encounters with extravagant and charming creatures.

As usual, we’ll leave you with the pleasure of finding out about these and all the other Bonelli publications of these two months, on the new version of “Giornale di Sergio Bonelli Editore Online”.