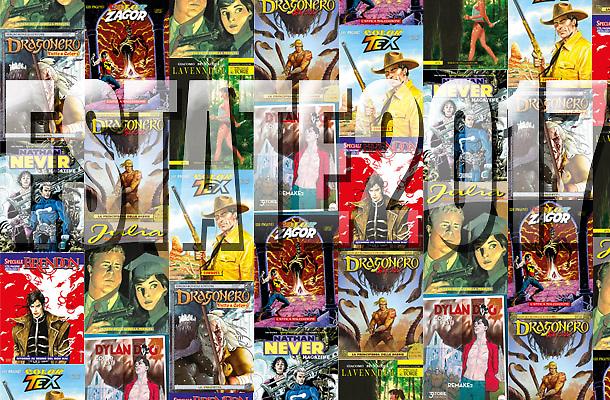 All the colors of adventure!

The hot summer winds will take a lot of full-color albums to your newsstands! Find out about it in our preview, in the new edition of Giornale di Sergio Bonelli Editore Online!

Every season has its own distinctive color, with so many emotional nuances. But as far as brightness, summertime is the hands-down winner in this "chromatic race". So, as we traditionally have done in the last few years, we will take part in this explosion of colors with our albums.

We will begin with the fourth Speciale Dragonero, immediately followed by the n.50 of the monthly series, in a unique full-color version to celebrate this important goal. We will have then the fourth Speciale Le Storie, with a notable guest, who will make his debut on our pages: Giacomo “Keison” Bevilacqua, well-known for his “A Panda piace”. Here he will don the clothes of the adventure author, with a very summer-like story, set on an exotic and sunny tropical island. A few days after, it will be time for a long-awaited comeback, with our Last Knight Errant: the 14th Speciale Brendon will see – in a brilliant full-color edition for the first time! – the return of the beloved character created by Claudio Chiaverotti almost 20 years ago (it was 1998)! Many colors will brim in the pages of Nathan Never Magazine. The theme of this issue is female-oriented sci-fi: Legs Weaver will be the main star, here, with many facets of (present, past, and future) adventure, told in an exquisitely "Legs-like” fashion. The investigations of our young criminologist from Garden City will be back in Speciale Julia n. 3. Then, it will be time for a plunge into the many shades of the Wild West: first with the 5th Color Zagor, then with the 11th Color Tex! What about a touch of horror? Here's Dylan Dog Color Fest n.22, the second album of this series dedicated to the acclaimed “remakes” of Dylan's classics.

If this injection of polychrome energy is not enough, here are the albums that usually are in full color already. Tex Classic and Il Dylan Dog di Tiziano Sclavi will go on with their new editions of the classics stories by Bonelli & Galleppini, and the greatest stories written by the "Dad" of Dweller of Craven Road. Cico will continue his strange journey through time, causing some of his funny catastrophes in every era. Martin Mystère le Nuove Avventure a Colori will come to a turning point, in the 12-part adventure created by “i Mysteriani”… there will be surprising revelations about the past of young Martin! The Orfani: Sam saga is even fuller of action than ever. Mercurio Loi's investigation will be even more intriguing, while our professor roams the street of an unusual and fascinating Rome.

But Bonelli's adventure has always been in black and white, and we just don't want to leave this path! Just to talk about the "unique" issues, Martin Mystère will live an eventful two-month period, with the 34th Speciale; a new Maxi that will take us back to “Zona X”; and, surprise!, a real novel: “La donna leopardo”, written by Andrea Carlo Cappi and chock-full of oriental mysteries! You don't want to miss another (graphic) novel, called “Cheyenne”: Michele Masiero and Fabio Valdambrini will take us on the trails of the Wild West, in a crepuscular and blood-tinged atmosphere. It's a riveting tale about the end of an era, seen through the eyes of two irreconcilable worlds.

Ah, yes, we almost forgot… the crossover that will be the main event of our summer! A meeting between the Nightmare Investigator and the Bonelli's Vampire-slayer par excellence! Dylan Dog and Dampyr will fight together against the Master of the Night, Lodbrok, in a not-to-be-missed adventure, that will begin on Dylan Dog 371 (coming up in late July) and end on Dampyr 209 (coming up in early August).

You can find everything about the adventure in store for you this summer on the new edition of our Giornale di Sergio Bonelli Editore Online!