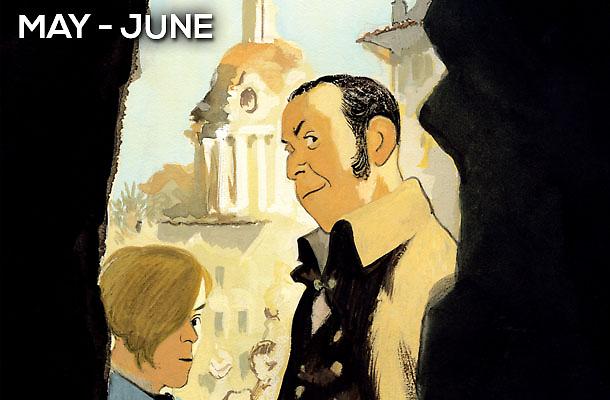 In this new edition of our Giornale di Sergio Bonelli Editore Online, we'll give a main role to an unusual and intriguing new hero: Rome, in 1825, is the hometown of Mercurio Loi, the latest comic creature by Alessandro Bilotta!

The next two months, May and June, will be richer than ever and chock full of hot news. We'll give the honor of opening the new edition of our Giornale di Sergio Bonelli Editore Online to a new hero: Mercurio Loi. The fans of our series Le Storie already met the unconventional professor in n.28 of the monthly issue. We will follow the character created by Alessandro Bilotta (who wrote many adventures of our Dylan Dog – the Planet of the Dead cycle, anyone? – and Le Storie) in his strolls through a strange and unpredictable Rome. It's 1825, a time when the Pope was king, and the characters in the city may look lunatic and strange to our "contemporary" eyes. It's an ideal breeding ground for a swarm of secret societies, dark conspirations, and shady types. Some of them will become Mercurio Loi's enemies, and he'll have to fight them with his mind and walking cane, in the streets, the vaults and the catacombs of papalist Rome! On May 23, you'll find the n.1 of the monthly series – that will always be in full color! – at your newsstands.

As far as number ones go, we need to mention the homage to Gallieno Ferri that our Publishing House, about a year after his passing away, will give him, with a monographic Avventura Magazine. We will offer you again the full first adventures of two heroes who made their debut through Ferri's unique vision: Zagor and Mister No! Besides the two comic stories, the volume also features in-depth dossiers about his career.

Still talking about Zagor and number ones, we'd like to highlight the debut of "Cico a spasso nel tempo", a full-color miniseries that will keep you company for six months, starting from June: how is it possible that Zagor's paunchy friend keeps hopping from an era to another? Will he manage to get back to his peaceful hut in the swamp? You'll find out between one laugh and another…

Do you need another number one? Here it comes: in early May, it will be time for "Il Dylan Dog di Tiziano Sclavi"! It's a monthly, hard-cover, 17x23 cm format album, with unique "pop" colors and a good amount of explanatory notes. Here, you'll find the best stories written by the Nightmare Investigator's "Dad." Still not satisfied? In May also, you'll find the first album of Nathan Never Rinascita, a miniseries by Michele Medda & Germano Bonazzi about a tense period in the life of our Special Agent Alfa. In the same month, Nathan Never's regular series will feature a full-color album, with beautiful art by Mario Alberti.

The list of new issues for the next two months also comprises a spectacular Texone by Boselli & Andreucci, with a younger than usual Tex; the Maxis (Zagor's 30th, Dylan Dog's 30th and Dampyr's 9th); Universo Alfa n.20 and Agenzia Alfa n.39, as well as the 21st Dylan Dog Color Fest. And also, Lilith's finale, with the last trip for the chrono-agent created by Luca Enoch.

Before leaving you with the pleasure to read our Sergio Bonelli Editore Online in full, we'd like to present a new graphic novel in our Romanzo a Fumetti series. It's the unnerving and sometimes psychedelic "La Bestia", a riveting and exciting hunt for a serial killer, written by Bruno Enna with art by Luigi Siniscalchi.