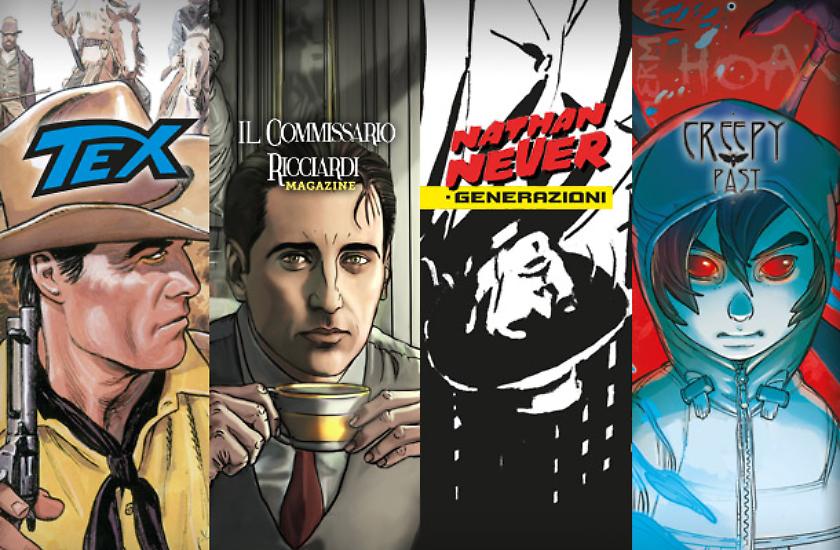 A real spring reawakening is waiting for you in May and June, and we will talk about it in this new edition of our Giornale di Sergio Bonelli Editore Online. As the new season will bring the shiniest colors of nature, we'll offer you the revival of adventure's many colors. Following the albums' publishing order, we'll first highlight Creepy Past: after a sneak peek with number Zero, published for the last Lucca comics fair, the series created by  Giovanni Di Gregorio, Bruno Enna and Giovanni Rigano will make its debut at your newsstands. With its engaging art and full-color pages, it will tickle the curiosity of our teen readers. This mysterious and horror-like tale will give you goosebumps and "creepy" thrills galore!

Another debut will be Il Commissario Ricciardi Magazine, a 176-page anthology series with four complete stories, starring the popular character created by the writer, Maurizio de Giovanni. The commissaire is the hero of our volumes in the series “Le stagioni del Commissario Ricciardi”, that last autumn took the comics adaptation of de Giovanni'a novels to your newsstands and bookstores. In the same book, you'll find a lengthy interview with de Giovanni about Ricciardi and the world he lives in.

Also in late May, you will find at your newsstands the first of the six albums of Nathan Never Generazioni. The miniseries, devised by Antonio Serra, allows you to meet six different Nathans, each one with a story universe of his own. But the journey begins a few days before, with a Number Zero, a free mini-album attached to Nathan Never n.324.

The last of our four not-to-be-missed volumes is the 33rd Tex Speciale, coming up in June as usual: Mauro Boselli and this year's guest artist, Mario “Majo” Rossi – who created so many iconic pages for Dampyr – have released a moving and tense story: while looking for the truth about the massacre of White Buffalo's peaceful Comanche tribe, the partners part ways. Tex goes on the tracks of the Comancheros, while Kit Willer, after a harsh confrontation with “Uncle” Carson, goes his own way and joins a Rangers' special unit.

Before leaving you with the pleasure of finding out about the other issues of the next two months, we'd like to highlight the 25th Dylan Dog Color Fest and Maxi Dylan Dog n.33; the newsstand edition of Monolith; the 22nd and final volume of Universo Alfa and the 41st Agenzia Alfa; Maxi Zagor n.33; Mercurio Loi's 11th album, (now a bimonthly edition); and the last two chapters of Orfani, with the epic finale of the saga.