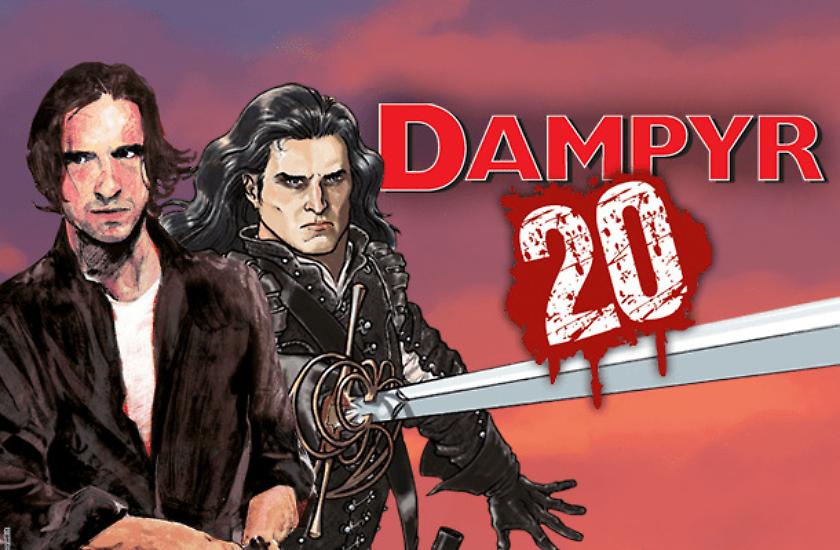 It's strange thinking that more than 20 years went by since, in January of 2000, on the hardcopy edition of our Giornale di Sergio Bonelli Editore, we introduced Dampyr for the first time. Very soon after that, in spring, the vampire-slayer created by Boselli & Colombo would have debuted at your newsstands. The hero with the "eyes of ice of a man who saw the myriad faces of Evil at a close distance", celebrates his two decades of life in April, and is in great shape. The festivities will begin on issue n. 241 - in an exceptional bigger format (112 pages) and spectacular colors - with a story full of love, death, war, and horror starring Draka, the Master of the Night who is Harlan's father. The fireworks won't stop here - in April, we will allow Dampyr's fans to read the many short stories we published over the years for several important comic events. For the first time, they are collected in a one-off album that the fans don't want to miss. Also, in 2020, there will be other special events, while we're waiting for the right time to give you some news about the long-awaited Dampyr movie that is now underway...

In the new edition of our Giornale Online, you can also find the preview of the newsstands edition of Nathan Never - Stazione Spaziale Internazionale, created in collaboration with the Italian Space Agency and European Space Agency. In March, you'll be able to read the adventure where our Special Agent Alfa meets the astronaut, Luca Parmitano. The Italian spaceman is the protagonist of a long, exclusive interview that has been updated after his comeback to Earth, in the "extra" content of this intriguing album in full color. Still about Nathan Never, the Intrigo Internazionale saga goes on, on the monthly series.

Meanwhile, on the pages of the Nightmare Investigator, the surprising "miniseries inside the series" Dylan Dog 666 continues. In March, the new Dylan Dog Magazine will be at your newsstands, with original stories and rich dossiers... full of horror! We also want to highlight Martin Mystère's last two issues of the second series of his Nuove Avventure a Colori, the 32nd Speciale Zagor, and the 26th Maxi Tex.