In January and February 2017, in the new edition of our Giornale online, the spotlight is on the news about Orfani and Tex! 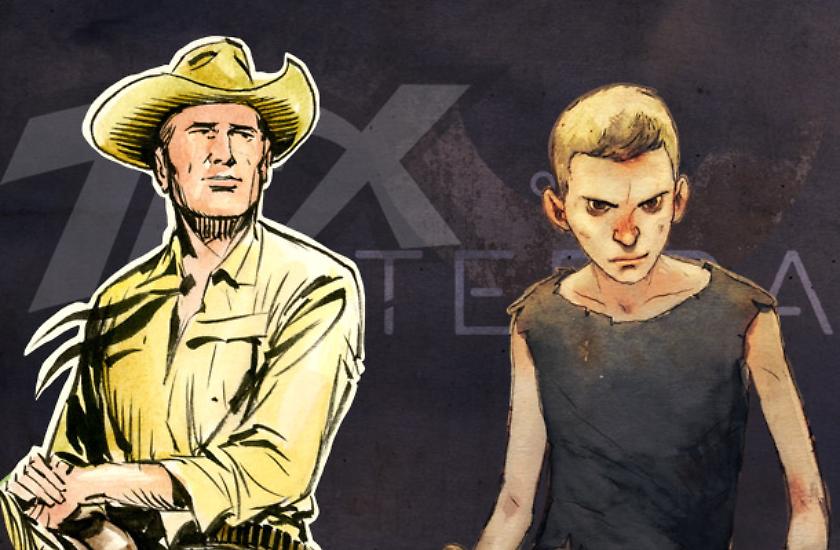 Dear friends,
In the first months of 2017 we will begin to introduce some important news that will mark the new year. One of the first that you’ll find at your newsstands is Orfani: Terra—the new season of the series by Recchioni & Mammucari. Three high-energy albums, with new and young heroes (Cain, Max, Miranda, Fango, Rat and Bug), and the debut of Emiliano Mammucari as a scriptwriter; you’ll find also increasingly more elegant and stylish color, and an exceptional cover artist who will take care of this chapters of the saga. As you may already know – if you have followed our anticipations from Lucca – it’s Gianni Pacinotti, aka Gipi. The artist from Pisa, the creator of wonderful graphic novels (like the new “La terra dei figli”), is making outstanding illustrations for Orfani: Terra, and the fact he decided to join us in this adventure for us is a cause of excitement as well as pride.

For Bonelli, a year that didn’t begin under Tex’s sign would be a real anomaly. indeed, our Ranger is here with an album not to be missed: the finale of the horror/fantastic trilogy about Yama’s comeback, as well as the new, well-stocked Tex Magazine. In February, it will be time for a special event. An album that will start the celebration for Galleppini’s centenary. The visual creator of Eagle-of-the-Night would have been 100 in 2017, and our publishing house chose to celebrate the anniversary with a classic story by Gianluigi Bonelli & Aurelio Galleppini, in a luxurious volume – in large format and with a hard cover –, with colors specially created by Oscar Celestini for this occasion. “Gli sterminatori” is one of the most unforgettable of Tex’s adventures, a tale that the artist from Casal di Pari created in his graphic prime.

Before we leave you to the pages of our Giornale di Sergio Bonelli Editore Online, allow us a couple of suggestions: you don’t want to miss the 29th Maxi Zagor (featuring a story set in New York City), as well as the 10th Asteroide Argo (with the final chapter of the space saga by Bepi Vigna), Dylan Dog Color Fest n.20 (with three stories, under the telling title of “Il buono, il brutto e la cattiva” – The good man, the ugly man and the bad woman), the 29th Maxi Dylan Dog – a triplet of dark adventures for our Old Boy –, and the next chapter of Martin Mystère, Le Nuove Avventure a colori, where, you can rest assured, plenty of surprises are in store!
A happy new year and a good read to everybody!