It's the sixth stop in our journey across 2020. This time, Zagor takes the stage. Our Spirit with the Hatchet is still able to amaze his readers after almost 60 years. 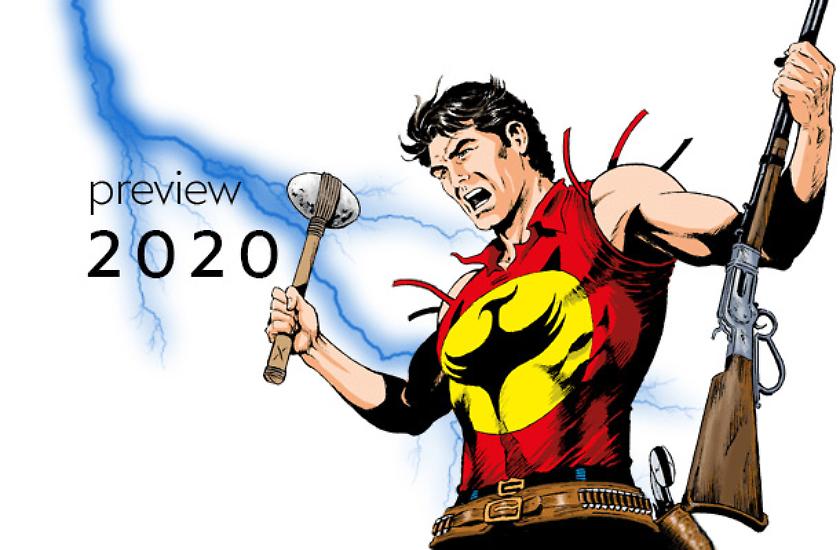 The year of grace 2020 precedes the next, momentous 2021. In the next twelve months, we will celebrate with many events the milestone of Zagor's 60th anniversary: his first adventure was published on June 15, 1961, with the strip mini-album "La foresta degli agguati". But even before these celebrations, 2020 will be full of excitement for the King of Darkwood!

The year of grace 2020 precedes the next, momentous 2021. In the next twelve months, we will celebrate with many events the milestone of Zagor's 60th anniversary.

The first issue, in January, followed the best Zagor's tradition. Not just because Joevito Nuccio's art is an original homage to the style of Gallieno Ferri, but also because Jacopo Rauch's script marks the return of an unforgettable character. Winter Snake, the fierce Kiowa chief created by Guido Nolitta, is back, and a tragic secret from his past is revealed. Also, the ending of this adventure opens up disquieting prospects of what will happen in the future.

The following story will be just as dramatic, with pencils and ink by Nando & Denisio Esposito. In "La figlia del mutante", we will meet Sophie Randall, the daughter of "Skull", the mutant, again. We had left her in a catatonic state, and now we find her in Rochester's insane asylum. She is awakened by her father's "voice ". His two-brained head, severed from his body after he died, had been taken in a shrine full of alcohol to the Elsewhere base to study it. But is it possible that the mutant's mental power is intact and can enhance the abilities of his daughter remotely?

Claudio Chiaverotti and Marco Torricelli will concoct a comeback for one of Zagor's oldest and most unforgettable enemies, Kandrax!

In summer, Claudio Chiaverotti and Marco Torricelli will concoct a comeback for one of Zagor's oldest and most unforgettable enemies, Kandrax! If you're wondering, you read it right: it's the Chiaverotti we all know as the author of a long series of Dylan Dog's stories, and the creator of Brendon and Morgan Lost. A real "guest star" that has finally chosen to reveal his long-standing passion for Zagor to the world. The writer jumped into the fray with his version of the druid created by Nolitta, with the help of the most experienced artist in Zagor staff - Torricelli, who has been working on our hero's stories since 1986. Then, the Serbian author, Bane Kerac, will tell us something more about Drunky Duck's past and the famed duo Samuel Marolla & Paolo Bisi, already authors of a couple of memorable stories, will give us a Darkwood version of a zombie apocalypse.

Another guest star has written the story that will close the year: Tito Faraci, on the pages of the regular series for the first time, after the six episodes of the miniseries "Cico a spasso nel tempo". It will be a classic "Wild West" adventure, with art by Marcello Mangiantini.

As for the Maxi volumes, in May, we'll have the fourth anthology of "I racconti di Darkwood". This time around, the short stories about the Spirit-with-the-Hatchet will be told by the patrons of the Pleasant Point trading post, in a frame drawn by Stefano Voltolini. This "series inside the series", with a narrative frame that hosts 40-page tales, was very well received by the public, and that's why we will continue to present it to you.

In May there will be the fourth anthology of "I racconti di Darkwood", with Stefano Voltolini drawing the frame.

Riccardo Secchi will also debut on the March Speciale, "La valle dell'Eden". The color album, in August, will sport art by Fabrizio Russo on a script by Mirko Perniola about Baron Icaro La Plume.

That's our plan for the next twelve months. If some details change in the meanwhile, we will let you know as soon as possible. Actually, some more information is missing from this preview, but a modicum of surprise is the spice of life! You can find regular updates on our website, and we will talk about our new initiatives during the public events at the next Comic conventions, or in the videos on the Bonelli online channels. Stay tuned!