It's the second installment of our preview of our Heroes' 2020. The limelight goes to Dragonero, who saw many revolutionary turns of events last year. And his next 12 months will not be precisely quiet and uneventful! 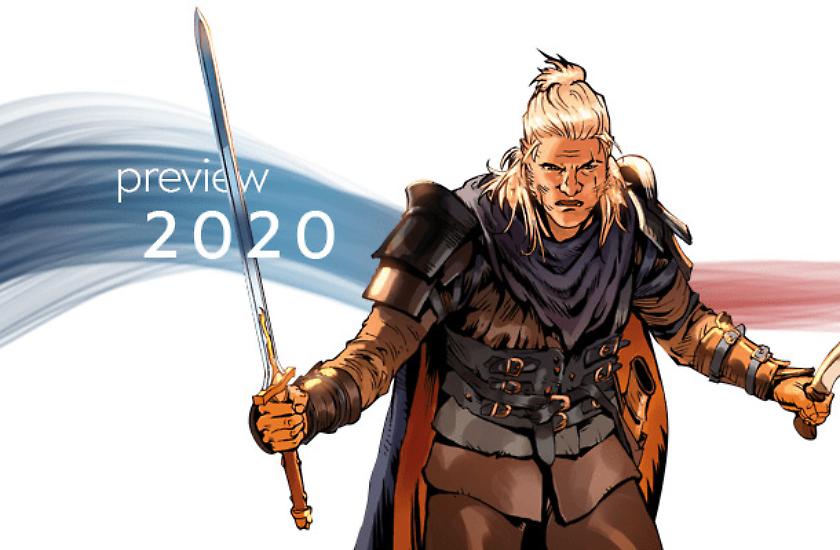 Substantial narrative unravelings marked the last months of 2019 in Dragonero's world: the riot against the Empire, that turned to evil after the blackmail the dark priest Leario imposed on the young emperor, Nahim. The cleric controls the goddess known as the Lady of Tears, the bearer of the terrible "red weep". Also, the series has seen a reboot, with a new number 1 and a new logo that highlights how Ian took sides with the rebellion. And also a new cover artist, Gianluca Pagliarani, replaced (with Paolo Francescutto's help on colors) a pillar of the series like Giuseppe Matteoni. Those are all the things you've already "lived"... So, what's new in 2020 in the most read fantasy comic book in Italy? Many new incredible adventures! Let's take a look at all of them in a quick preview of the new shiny Dragonero's year!

In January, giant stone statues took the stage. Animated by magic, they protect the Eleusi people, that has always been unjustly persecuted in all the Erondàr, and now, after the zero-tolerance policy against the other religions imposed by Leario, are living through tough times. Luca Enoch wrote the story for the art of Vincenzo Riccardi, whose energetic style rich in blacks was the ideal to recreate the anxious and tormented atmosphere of the "witch hunt" against peace-loving herborists and botanist like the Eleusi.

February is time for the debut of Luca Barbieri, the series editor, as the writer of an adventure that takes us back to past times. A mysterious appointment at an abandoned fortress gives Ian the chance to tell his companions about a harsh moment of his past, an event that still projects a "shadow onto his heart". This extended flashback (with extraordinary art by an inspired Alessandro Bignamini) takes us to a desolated place, lost in the naked peaks of the mountain range north-east of Solian, where only the law of the stronger rules... and that's the law of the cruel and sadistic Kilvar! The narrative frame of the flashback is entrusted to Luca Bonessi, a newcomer who's already entirely at ease with Dragonero's world, and fluidly segues into the story that the March album tells, written by Luca Enoch with pencils by Riccardo Latina. The story is entirely set in the scorching hot Vhacondàr, where a handful of desperados fight for their lives inside a gladiator arena, trying to earn the love of the public with their swords. And Ian is particularly interested in somebody who's hiding among them...

The story is an ideal sequel to our Speciale n.4, titled "La principessa delle sabbie" (by Luca Enoch and Alessandro Bignamini, 2017), that left unanswered the fate of some of its characters: we'll find out about it now, a tangible proof that nothing is forgotten, in the world created by Enoch & Stefano Vietti. And, to freshen up our reader's memory, the spring hard-cover edition of Dragonero contains a deluxe version of that adventure: find it at your bookstores!

In April, here's a story that will open significant (and terrible) slashes on the future of Dragonero's world, revealing a painful secret that Sera has held in her heart for a long time. The entire team gathered for this pivotal episode, with a plot written by the two creators, Luca Enoch & Stefano Vietti, and the series' editor, Luca Barbieri, for the art of the two cover artists of the series: the past one, Giuseppe Matteoni, and the actual cover artist, Gianluca Pagliarani, with the help of a Giuseppe De Luca on top of his form.

Spring will go on with two stories about two crucial moments of the rebellion, focused on characters that, although marginal until now, will have a decisive role: the Orcs, gathered at a meeting for the election of their new leader, in a story by Stefano Vietti with art by Fabrizio Galliccia. And what's left of the technocrats, and especially Myrva (you thought that we had all but forgotten about here, didn't you?!). She will be the main character of a story by Luca Enoch for the art of Gianluca Gugliotta, about the Tower of Tectuendàrt.

In summer, we'll have the pleasure of a comeback by artist Antonella Platano, in an adventure written by Luca Enoch about the mysterious connection between dragons and witches, with a shocking turn of events! In our usual summer Speciale, where Enoch and artist Alessandro Pastrovicchio will take us into the deep (and, hopefully, cool) darkness of the new forest that has grown in the place where the flying Island of the Black Queens fell, among dangerous and evil creatures. As in our tradition, the colors will be digitally painted on the pages by our excellent long-timer,  Piky Hamilton.

As summer ends and autumn begins, on the road to the Lucca Comics & Games convention, Stefano Vietti will do most of the work, with a series of exciting adventures that will take us alongside Alben (and we'll get to know his past a little bit better) on a search for the precious relics that are needed to fight the war against the Lady of Tears. Finally, we'll end up in a narrow mountain gully where a new, decisive turn of events will change the balance of the series again. There will also be notable victims: keep your tissues ready. What about next Christmas? The usual suspect, Vietti, has a "golden" present in store for you. Also, in a juicy preview of the stories of our Magazine 2020, there will be stories about dwarves, and this means Luca Enoch (no one can beat Luca when it comes to telling dwarf stories!)..

There are still some missing pieces for a complete picture (next autumn's deluxe hard-cover edition and the two stories of Senzanima that will come out in 2020), but we won't reveal too much: a good part of enjoying something is in the wait!