A date with the bookstore!

Thursday, June 6, we have three new books coming out. Three very different books but all very special. Hare are some wonderful pages from these three tomes. 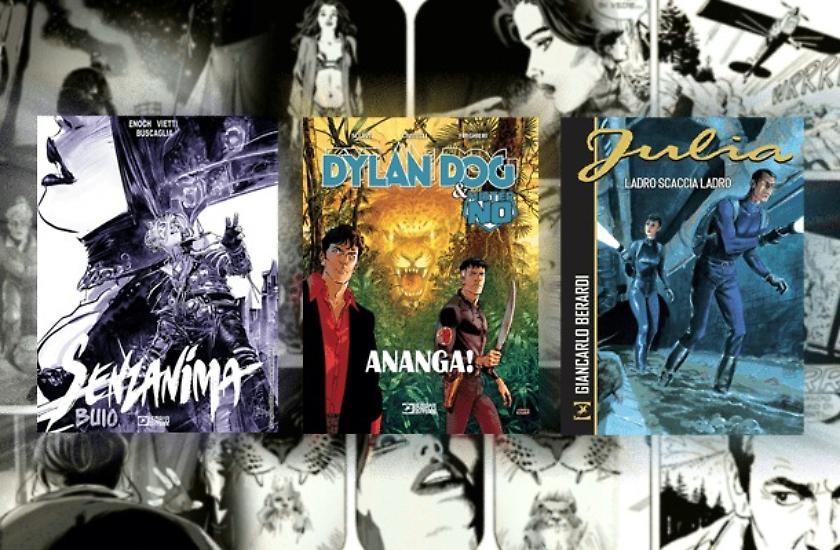 Thee books starring some of our most beloved characters will be available in bookstores, comicbook stores and our online Shop from Thursday, June 6.

First, we have Senzanima. Buio, the third installment of the series about the life of a young Ian Aranill between the mercenaries known as "Senzanima". An hardcover, giant-size book, Buio is written by Luca Enoch with art by Alfio Buscaglia and colors by Andres Mossa. The cover, as usual, is painted by Mario Alberti.

The we have a team-up between Dylan Dog and Mister No, unified against the Jaguar Demon Ananga. Created by Tiziano Sclavi for two Mister No albums between 1982 and 1983, the creature came back 15 years later in two issues of Dylan Dog and saw her editorial life ending in a Dylan Dog Color Fest in the Spring of 2014. This hardcover book by Tiziano Sclavi, Giovanni Freghieri and Fabio Civitelli, with a cover by Bruno Brindisi, collects all those adventures.

Last but not least, the new softcover book of Julia, "Ladro scaccia ladro", where the investigator from Garden City meets aggain with gentleman thief Tim O'Leary in three breathtaking adventures. 400 pages in black and white written by Giancarlo Berardi and Maurizio Mantero with art by Luigi Pittaluga and Federico Antinori and cover by Marco Soldi.