March and April will be under the sign of two evergreen classics, in a full-color version that will make their fans rejoice: let’s give a warm welcome to Zagor Classic and a new edition of Storia del West! 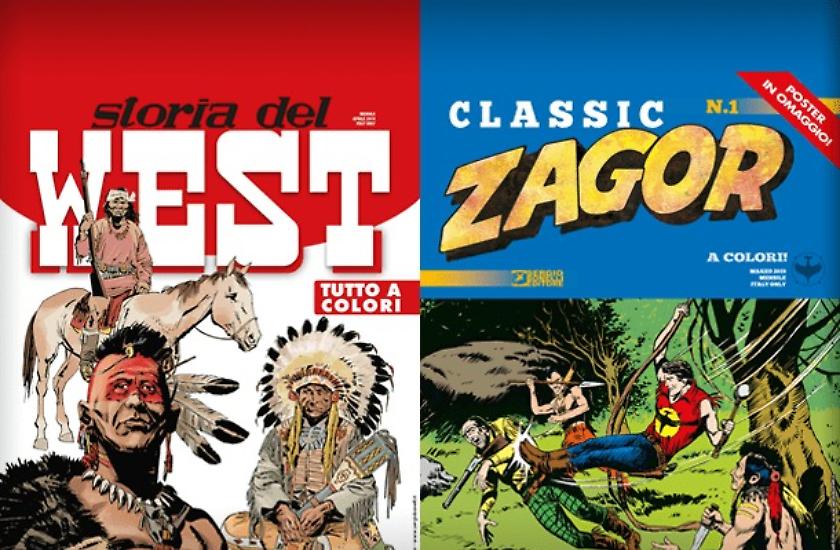 Even though in publishing it's a good thing to look forward and never stop, it is also true that you shouldn't forget about your roots. Preserving the stories that constitute the foundation of the comic adventure imagination and presenting them to the new generations is somewhat of a duty. That's why we are launching two important series, that will debut in the next two months. The first one to appear at your newsstands is titled Zagor Classic: a monthly reprint, in chronological order, of the historical earlier exploits of the Spirit-with-the-Hatchet. Eighty pages, in full color, under a series of covers that are themselves a significant testimony of our past: we've chosen the cover art from a selection of illustrations created by our beloved master, Gallieno Ferri, for the strip comic editions of Zagor, published in 1961-1970. The first issue of the series will be accompanied by a large-format poster, with the first unforgettable appearance of Zagor in the "giant" album format, on the cover of n.52 of the Zenith series. Starting with the second issue, we will present you with a set of postcards devoted to the covers created by Gallieno Ferri in his more than 50-year long work on the King of Darkwood. An event that follows the lead of our successful Tex Classic series, and will make all the Zagor fans happy!

The second illustrious comeback is a staple in the history of the Wild West comics, the most famous and acclaimed work by Gino D'Antonio: Storia del West! Starting from April, you will find at your newsstands the monthly reprint of this must-have classic, in an unpublished-before color version in large format, published in co-edition with If Edizioni. Thus, all the readers will have the chance of following the riveting saga of the MacDonald family, across an entire century of American history. A masterpiece either to reread or to enjoy for the first time, marveling at how fresh and up-to-date it still feels, more than 50 years after its debut on the pages of  Collana Rodeo.

March and April will also feature many special events. While Mister No Revolution and Cani sciolti continue, Mercurio Loi will have his swan song on the 16th episode. On Dylan Dog's pages, the meteor is coming increasingly nearer to our planet, while the new Dylan Dog Magazine, besides the usual articles and in-depth files, will offer two stories of the Nightmare Investigator; Zagor will have his 31st Speciale, Tex will live two new complete adventures in the 24th Maxi, and three stories will be included in Maxi Nathan Never n.17.

Last but not least, we'd like to say a few words about Tex Willer: the feats of the young and reckless "outlaw Tex" conquered the hearts of our readers, who are ready to plunge into a new, exciting story in five chapters, that will start in the March issue!

Here it is, the new edition of the Journal of Sergio Bonelli with all our books from the next two months!