Our preview of what’s in store in 2019 for the Bonelli Heroes continues. This time around, the spotlight is on Nathan Never. What will happen to our beloved Special Agent Alfa, in the next 12 months? 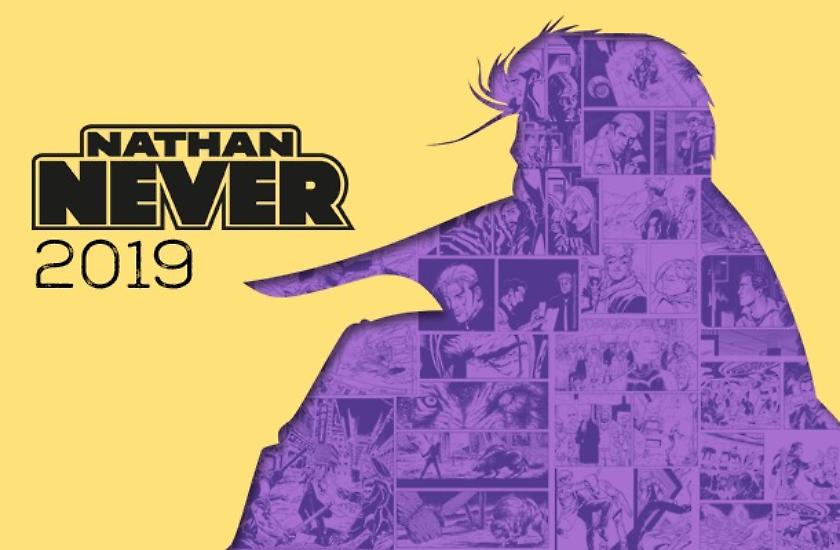 Our 2019 will count on a strong female contingent: in the first six months of the regular series, we will feature five female artist and a story starring Elania Elmore.

Although we're living a less than easy time, Nathan Never's new year won't feel subdued at all. We'll risk being called "overconfident" on the social networks, but we dare say we are delighted with the menu we prepared for you in the next months! First of all, our 2019 will count on a strong female contingent: in the first six months of the regular series, we will feature five female artist - almost a record! - and a story starring Elania Elmore that will span several albums of the monthly series!

As if that wasn't enough, in next December you will be able to read the beginning of the long-awaited saga created by Medda & Vigna: nine albums with an accurate continuity that will accompany us for the most part of 2020, and that will culminate - in 2021 - in an entire year signed by the two writers. We will present it to you in depth in a few months.

We started talking about it in 2015 and announced it for 2017... Asked for passionately in our public events, or heartfelt letters to our editorial section, "Etherea" finally saw the light in January. It's a space story that marked the debut at Bonelli of the acclaimed Disney writer, Giorgio Salati, with the art of a spectacular Guido Masala. In February, to celebrate the best Valentines Day of your life – that's our wish for you! - we prepared "L'amore uccide", an album with two complete "romantic" stories. Well, that's not entirely true... let's just say that, as in the title "Love Kills", they are centered on love as an obsession more than a feeling... The first part is written by Mirko Perniola for the art of Paolo Di Clemente, while the second is by Davide Rigamonti for the art of Val Romeo... The second of this stories, "Tracce di verità", is a juicy "entrée" for the adventure that will feature Elania Elmore as its undisputed star, in the April and May issues of the monthly series, again written by Rigamonti with art by Vanessa Belardo, and Busticchi & Paesani, who have been widely acclaimed for their latest Maxi Nathan Never.

June will mark the debut on the monthly series of Piero Fissore, with a disturbing story that tackles head on a controversial subject: sex and perversion in Nathan's world.

Taking a step back, n.334, coming up in March - and titled "Rapimento alieno" - is a collaboration between Michele Medda and Elena Pianta on a story full of mystery and atmosphere. We were so happy with the excellent job they did that the pair is already working on a new adventure. June will mark the debut on the monthly series of Piero Fissore, a writer from Liguria that you had the chance to get to know and appreciate on Agenzia Alfa. This time, he'll offer you a disturbing story that tackles head on a controversial subject: sex and perversion in Nathan's world, with the suggestive and seductive art by Melissa Zanella. July and August will feature the latest story written by Giovanni Eccher, with art by Paolo Di Clemente and Andrea Cascioli, and the introduction of a new agent in Agenzia Alfa. In September, Bepi Vigna will display the idea of reality, as usual, with the capable help of Giez's art. In October, Davide Rigamonti will give his farewell to the series with one of his classic, riveting and desperate stories, with art by the ever-reliable Stefano Santoro.

We'd like to give you a further suggestion about Rigamonti: keep an eye on your newsstands, because the Milanese writer will be the "deus ex machina" of a new and fascinating sci-fi project. But we will talk about it profusely another time.

In November, we conceived another album with two short stories: the first one, by Michele Medda and Stefano Casini, will see Nathan in a desertic zone, fighting bikers and centipedes; the other, with Alessandro Russo as a writer-artist, will be linked to December's Speciale, by the same author. It will be a proper ending to the gripping "Darkness Saga". After that, this formula with two short stories will be shelved, on the monthly series.

Along the year, you will also find the usual appointments with Maxi Nathan Never, in April and October: the first one will feature adventures by Riccardo Secchi, Giovanni Gualdoni, and a newcomer, Andrea Garagiola; on the second, you'll find stories by Stefano Piani, Lucio Sammartino, Michela Da Sacco, and Fissore.