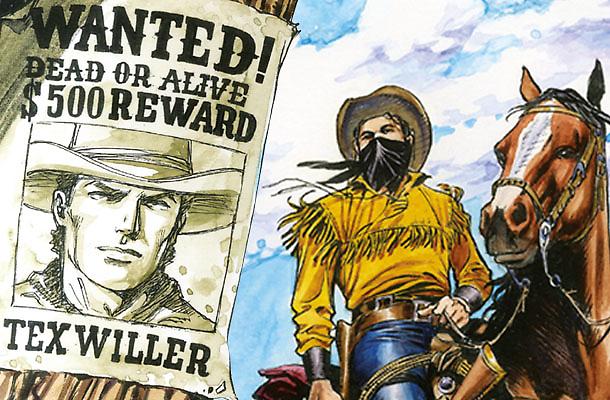 This year’s last two-month span and our Giornale di Sergio Bonelli Editore will be under the indelible mark of a historical debut: a new monthly series entirely devoted to the Western hero. Tex Willer will be waiting for you at your favorite newsstands!

At last! The long-awaited moment is here! We are not just talking about the release of this Giornale di Sergio Bonelli Editore (a little late, as we announced, due to the presence of our editorial team at LuccaComics…), but above all of Tex Willer’s debut! After the exciting news announced at the opening of the great exhibition “Tex. 70 anni di un mito” in Milan (open until January 27, 2019), here comes the real debut for a new series starring the evergreen Bonellian hero. What better way to celebrate the character – created by Gianluigi Bonelli with art by Aurelio Galleppini back in 1948 – than a series of brand new, unpublished adventures: stories about Tex’s early years, when he was a reckless, unstoppable outlaw!

Unlike Tex’s widely promoted new series, we kept the secret about another surprise event regarding one of our “cult” heroes: Dylan Dog. The eagerly anticipated “meteor saga” will begin in November and will accompany us to the Old Boy’s 400th issue. To make it even more special, we decided to give you a present: the precious Nightmare Tarots. Initially produced by Lo Scarabeo in the 1990s, the deck of cards had become unobtainable: now we will give it to you for free, attached to four of the next monthly issues. In next February’s Dylan Dog Color Fest you’ll find the box to keep the cards. In each album, you’ll find twenty cards apiece, for a total deck of eighty tarots: major and minor arcana, all with the beautiful art of the Maestro, Angelo Stano!

In our usual overview of the entire menu of the next two months, let’s take a more extended look at the titles collected under the Audace label. While Deadwood Dick’s biting adventures rage on, November will see the debut of Cani sciolti (by Gianfranco Manfredi). In December you’ll find the first issue of the color series Mister No Revolution, with an engagingly unusual Jerry Drake! Still talking about our full-color issues, here’s the 27th Dylan Dog Color Fest, the 14th Tex Color and the eighth Color Zagor (a team-up of the Spirit-with-the-Hatchet and Brad Barron, hunting down aliens in the Darkwood Forest!). There will also be Martin Mystère e il Grande Zirmani, a magical album where our Detective of the Impossible crosses paths with the illusionist whose “official” biographer is Raul Cremona, the popular comedian, actor, and magician. Martin Mystère and Dylan Dog will work together in an adventure coming up in late November. They will have to join forces to fight an evil mastermind who, after traveling in time and defeating death, threatens the entire universe of the Bonellian Heroes: rest assured, this team-up will make all our readers’ hearts rejoice, and not only Dylan and Martin’s fans. We forewarned you…

What about a third team-up? Yes, sir! Here’s a crazy, visionary meeting between Morgan Lost and Dylan Dog, in two albums, each with a spectacular cover connected to the other.

We still have four more things to highlight: Dragonero Magazine, for the fans of all-around fantasy stories; the fourth tome of Il Commissario Ricciardi a Fumetti, "Il giorno dei morti", which ends the first cycle of stories taken from Maurizio de Giovanni’s novels; the 29th Speciale Nathan Never; and, finally, Julia’s reprint, with a best of the adventures of our criminologist from Garden City. And, exceptionally, the first issues will be in full color!

Anything else? We’ll leave you with the pleasure of finding out about it, leafing through the pages of the new edition of our Giornale di Sergio Bonelli Editore online!